AUTHOR
T. Ballard Lesemann
From its original conceptualization as a craft beer bar to its realization as Charleston's premier brewpub and upscale-casual eatery, co-owners of Edmund's Oast Scott Shor and Rich Carley have a lot to be proud of. 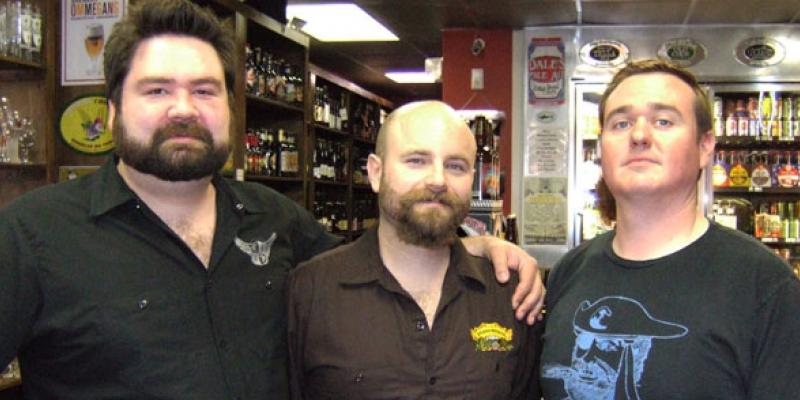 In Charleston's vibrant beer community, entrepreneurs Scott Shor and Rich Carley stand out as Charleston's most ambitious and genuinely enthusiastic partnership. They're the humble-but-dynamic duo of craft beer and the colorful culture of the still-burgeoning South Carolina beer scene.

As many loyal customers and friends already know well, Shor and Carley initially established themselves in town a few years ago as proprietors of the Charleston Beer Exchange, serving as unpretentious beer experts with a positive, insightful approach to advancing the appreciation and knowledge of world-class beer and local breweries.

"You know, I can't stand people being snobby about beer," says Scott Shor. "That's just the opposite of what we're about. We want people to learn about beer and try new stuff. I hate when people try to be really elitist about craft beer. I loathe that. It's supposed to be about what you like and what tastes good to you."

This month at their latest business venture, Edmund's Oast, Shor and Carley celebrate a phenomenally successful first year as co-owners of the most exquisite brewpub and upscale-casual eatery in the city.

As business partners back in 2008, Shor and Carley opened the cozy Charleston Beer Exchange at at 14 Exchange Street, just off of East Bay Street, as a specialty retailer specializing in domestic microbrews and hard-to-find imports. As one of the pioneers of the recent craft beer movement in the Lowcountry, the Charleston Beer Exchange, they were the first business in town to offer a full growler-fill station with a rotating menu of fine ales and lagers.

With knowledgeable staffer (and certified Cicerone) Brandon Plyler on board, the Charleston Beer Exchange earned credibility with local beer enthusiasts and gained a reputation for helpful service and an ever-changing range of seasonals and specialties.

In addition to their duties at the Beer Exchange, Edmund's Oast has demanded the most from Shor and Carley since late 2013.

It's been an intense and exhilarating first year in business. The opening last February was perhaps one of the most highly anticipated restaurant events of 2014. Not only were beer lovers eager to check out what the new spot had to offer (and the manner in which beers would be offered), but fancy foodies, wine fanatics, and mixology-minded cocktail drinkers were intrigued as well.

"We put so much passion and thought into all of these things at once," he adds. "I think that's what makes it special."

The ideas behind Edmund's Oast started to take shape when Shor and Carley found out about a space in the up-and-coming North Morrison Drive neighborhood through local developer Stephen Zoukis (of Raven Cliff Co. and the Half Mile North project). In 2013, they secured a large building at 1081 Morrison Drive, just a block south of popular watering hole the Tattooed Moose, and a few blocks north of hip lounges and music venues the Royal American and Local 616.

Working with Stumphouse Architecture and the Lennon Construction Company, they designed the main dining area and kitchen, making room for a sizable keg cooler and a full-sized in-house brewery with a dedicated barrel room for aging.

"Initially, we didn't plan to have our own brewery; that's wasn't necessarily part of the original model," Shor admits. "When we first started looking, most of the spaces weren't large enough to put a brewery in. We were very fortunate here. We allowed the space to dictate some of the design ideas. We're both very much into letting the space speak for itself."

It might surprise some to learn that Shor and Carley didn't necessarily want to open a brewpub; they simply wanted to open a craft beer bar.

"At first, it was no wine, no liquor, no food—just craft beer, period," Carley says. "Then, we wanted to do a restaurant so it would attract a larger audience that would focus on craft beer, but have wine and liquor, too. When we finally found the Morrison Drive location, we knew we could brew our own beer there too because it is huge. That's when the whole concept started to gel."

Shor says that when they started looking at different spots around town, he figured that the place they picked would really dictate what the overall style and programs would be.

"Ultimately, we wound up here in a big, open space that had a lot of light, plenty of parking, and extra outdoor space," he says. "Once we were here, we wanted to include a brewery and accentuate the natural light with big windows. Instead of a dark and cavernous beer bar, it would be bright and rustic and spacious with a farmhouse-y kind of feel to it."

With the renovations and construction coming together, Shor and Carley enlisted skillful chef Andy Henderson to design a deeply Southern, farm-to-table menu (for nightly dinner and Sunday brunch) and an expansive charcuterie program. Henderson quickly earned some serious acclaim in the local foodie world during the early months.

"Andy's approach was always to use the best quality ingredients and use proper technique," says Carley. "That'll never change."

"The menu is always changing," Shor says. "All of our ingredients—from vegetables and fruits to proteins—are sourced locally and from around the Southeast, often from farms that Andy knows personally well. To work with those kinds of products, you have to have a lot of flexibility. We're not working with giant, corporate food operations, so we have to roll with the punches."

For the front-of-house service team, they hired Jessica Nicoles, a veteran server with valuable experience from Carolina’s (down the block from the Charleston Beer Exchange) and The Macintosh (on Upper King Street). To serve as head brewer and director of beverage operations, Shor and Carley invited Cameron Read down from the Greenville location of their second Beer Exchange shop. Read's knowledge and classic styles and willingness to deviate and experiment around them impressed the growing Edmund's Oast team.

"Working on the beer program came naturally to me, Rich, and Cameron after being around the craft beer world for a long time," Shor says. "Cameron currently brews the house-made beers and curates the selection of guest beers for the restaurant. We try to keep it diverse, and we try to offer a variety of styles and twists on styles. We want to offer something for everyone. We try to present the beers in the best possible way we can. I think we're uniquely positioned to have a very good handle on it."

One of the final members of the team came in January 2014 with the hiring of ace mixologist Jayce McConnell, a native of Savannah, Ga., who'd previously been dazzling customers and critics with his bar skills and cocktail recipes at the Snackbar in Oxford, Miss.

McConnell designed the back bar and composed the initial menu of specialty cocktails just before the grand opening, utilizing a expansive roster of bitters, tinctures, flavored liquors, and ices. As opposed to most bars in town, there is no Jägermeister, Jim Beam, flavored vodka, or Fireball behind the counter. There are, however, numerous selections of small-batch spirits, exotic liqueurs, and well-aged whiskies.

McConnell's bar team handles a 48-taps system along the main back bar wall, most of which offer beer. The four or five free taps usually pour house-made draft cocktails, locally made craft sodas from the Cannonborough Beverage Company, and featured wines. Served on tap over ice, McConnell's Chatham Artillery Punch—a bubbly blend of bourbon, brandy, rum, lemon, and sparkling wine—comes from an old-school recipe favored in his hometown.

Both Read and McConnell brought serious skill, technique, knowledge, and creativity to the Oast team, and their personalities were well reflected in the beer and spirits programs.

"They're both very talented and very focused on doing everything perfectly," Carley says. "When Jayce creates a new cocktail and has me try it, it always blows me away how good it is, every time. He's always trying to make it better, but he nails it right away. Cam is another perfection freak. His brewery is spotless, he tastes and re-tastes and re-tastes all of his beers, looking for the tiniest flaw, and he painstakingly manages our draft and bottled beer selections. They're very hard workers and take great pride in their work."

Whereas most brewpubs around the Southeast and the rest of the U.S. tend to lean toward typical tavern/pizza point/burger grill fare within a familiar "pub-like" setting, Edmund's Oast aimed for a more elegant approach—not quite "fine dining" by category, but pretty close to it.

Since opening on Valentine's Day, 2014, there've been no flashy banners or neon signs placed along the Morrison Drive side of the facility. "A lot of first-time visitors complain that they couldn't find it and drove right past it," chuckles Shor.

It's still a low-key scene as one approaches the site of the Oast, although there is one major addition outside the main entrance. Earlier this winter, Edmund's Oast unveiled a spacious open-air structure in their front courtyard called "the Bower." With 100 seats along several long, wooden tables, the wide-beamed, nicely screened roofed area offers shelter from the cold and windy weather. An abbreviated menu of 16 draught beers, wines, and cocktails is available at the Bower bar.

With a high ceiling room full of cedar beams and high-back chairs, and not one television in sight, the dining room boasted a refined atmosphere—one that reflected the elevated spirits, wines, sodas, and beers on the menu.

"There weren't any specific brewpubs that inspired us. I think we're pretty unique in that Edmund's Oast is a culmination of what everyone involved really loves—Rich and myself, and Andy, Cam, Jayce, and Jessica," says Shor. "We're all really into different things that we usually seek out separately, from great wine bars or great cocktail bars or great eateries. We took from all of that, and we decided to be ambitious and try to do all of that under one roof."

Out of all of the dozen or so house-made beers Edmund's Oast has offered on draught this year, which ones have been their own personal favorites?

"I love all of our sour beers," says Carley. "The Dagger & Doll is my favorite of them. Cam's newest beer, Viridi Rex, is my current favorite. It's seriously one of the best Imperial IPAs I've ever tasted, anywhere. I actually didn't even think I liked IPAs at all anymore until I tasted it."

Shor agrees. "Some of the recent beers, like the recent Viridi Rex and the Dagger & Doll sour ale, have come out exceptionally well," he says. "I think everything Cam has put out this year has been solid. One that got the most attention was the specialty Peanut Butter & Jelly brown ale [brewed with Concord grape juice and fresh peanut butter]. It has been the most talked about beer of the year—and the one that we've re-brewed the most."

Shor is confident in the direction Edmund's Oast is taking as it heads into year two. Despite the slew of positive reviews and overwhelming support from loyal customers, he anticipates more than a few challenges to encounter over the next 12 months and beyond.

"I think the main challenge is staying relevant," he says. "We were very fortunate to receive some positive press during our first year, and that keeps people talking about you, which is great. The newness made people excited about us, but people are always chasing what's new. We won't be new during our second year, and we don't really advertise, so maintaining the buzz and enthusiasm that we enjoyed during our first year will be a challenge." 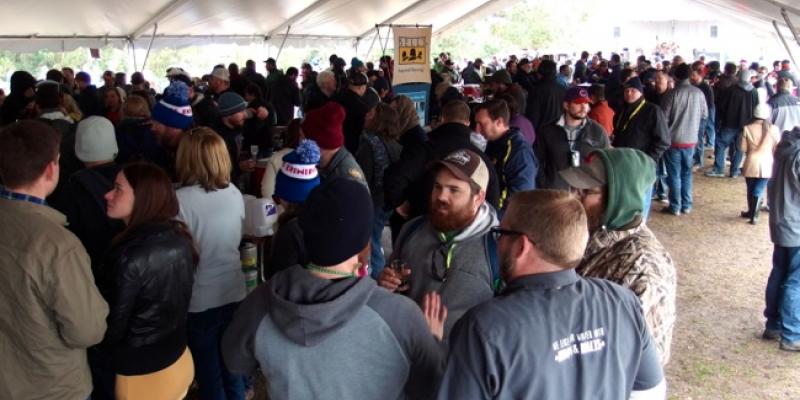