I don’t expect sympathy when I tell you that I had to drink – a lot – to cover BevCon 2017, but I risked pounding head and wobbly knees all for the Grit reader.

BevCon, in its second year, is the industry conference for all things alcohol, and you can’t learn about a thing if it stays theoretical – you have to drink the thing. In fact, you have to drink many things in the name of seeking knowledge. The participants are luminaries in the beverage world, including writers, bar owners and beverage directors at some of the hottest spots in Charleston and around the country.

Where did our drinks come from and, more important, what’s coming soon from the Manbunned Mixologists and Badass Bartending Babes who pour our libations?

Panel: What Lies Ahead

--Millennials are shaping the cocktail and wine menu, and they are more alco-literate than previous generations.

--People like their booze to have a backstory, hence the elaborate tales from distilleries, but some of that history is less than savory. Prostitutes, for example, were such important sellers of whiskey that they would often get a commission from whisker-makers.

--Frose, which is a thing, although no one can explain why

--Agave, although we may look back at this as the beginning of agave’s end.

--Barrels, so much so that it’s actually having an effect on oak forestry. 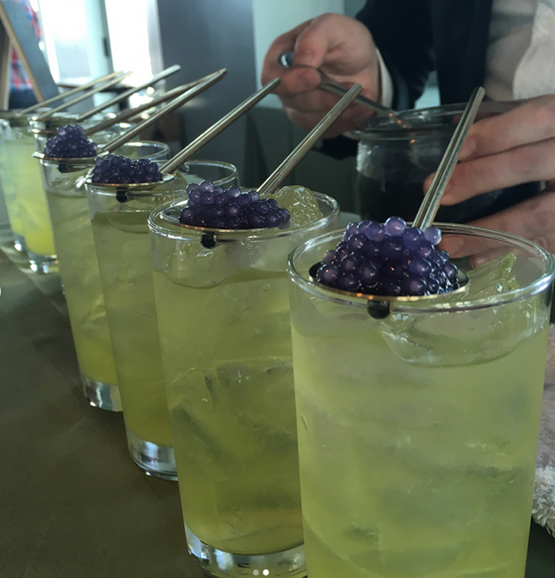 Panel: Peering Into the Crystal Ball

--The biggest F&B changes will be staffing shortages and market saturation (two things we know a lot about in Charleston, with restaurants poaching each others’ staffs, and new restaurants opening every minute!)

--Since recruiting new talent is so difficult, bars and restaurants have to focus on innovative ways to retain the staff they have. Word of mouth can help with that; as Palmer says, “good people would rather work with good people.”

--The foodie culture has resulted in people entering the industry wanting to be chefs, but not so much wanting to put in the time at the lower end of the F&B spectrum.

-- It can be painful to fire someone with all the staffing shortages, but the panel agrees that they always wish they had been quicker to fire someone who didn’t fit the culture. Sagaria calls it removing them from the staff and “promoting them to guest.”

--In Charleston, Palmer says the restaurant concept voids to fill are Indian and Asian.

--Industry trends will include more fast casual and more emotionally intelligent designed spaces that lure people to hang out rather than take out.

--Finer dining may migrate to smaller towns as the cost for square footage skyrockets in larger markets.

--The high cost of real estate will push efficiencies such as shared space (a coffee shop by day, a restaurant by night, for example) and better use of technology to map just-in-time dining trends.

--None of the trends will supersede the importance of real, human hospitality.

Panel: Waves of Immigration and How They Affected Our Drinkways

--Founding Fathers were day drinkers and the original meaning of “cocktail” meant to “cock up your tail” as in, to get you going in the morning.

--Our basic pattern has been that America has a wave of immigration and then, about two generations later, those immigrants’ drinks get adopted and Americanized.

--By the 1830s, Germans, many of whom fought on the Union side in the Civil War, were bringing juleps, smashes and cobblers to our drinking world. Americans were agog at the fancy cocktails the Germans produced, drinks that contained Benedictine, Chartreuse, Crème de Whatever.

--The Irish looked askance at the fancy German ways, and began to serve rye and whiskey straight – it had only ever been in punch before that. The Irish also brought the concept of sitting in a bar and ordering food to go with your whiskey.

--Italians brought us vermouth at the end of the 19th Century and Eastern Europeans brought vodka bars.

--World War II brought the popularity of tequila, as other liquors became harder to find. Enter the Margarita.

The next big wines, according to the panel?

--The reds of the Galicia region of Spain