AUTHOR
Kristen Milford
Music veterans Run Dan Run and Infinitikiss played an April Fool's show at the Redux Contemporary Art Center, celebrating the official album release of Mr. Jenkins' "Greatest Hits." This show marks the third in the residency, which showcases local bands each Wednesday for period of five weeks straight. It's no joke that #WednesdayisthenewFriday. 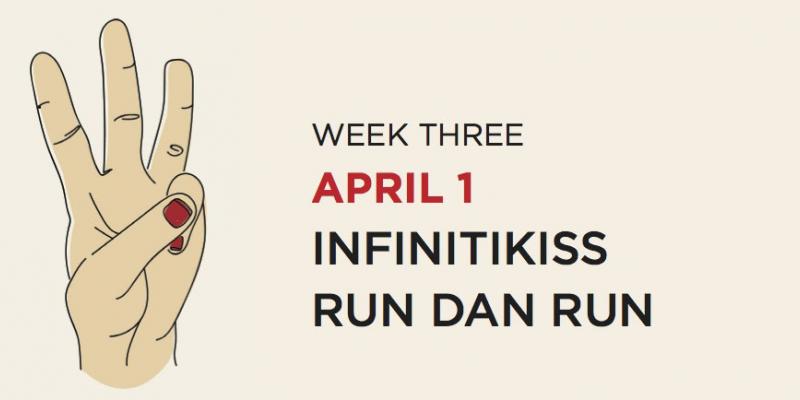 With digital streaming going live in the weeks leading up to the show, Infinitikiss exploded onto the scene at his album launch April 1 at Redux with special guest Run Dan Run, marking the third concert as part of the Hearts & Plugs Redux Residency series. Run Dan Run (affectionately referred to as "RDR" among the locals) has been spitting out indie-rock tunes since the mid-2000s, with Nick's sound-collage solo pieces following under the moniker Mr. Jenkins, now known as Infinitikiss. With fans both old and new, listeners were treated to the dance party of the century to celebrate Mr. Jenkins' Greatest Hits LP, the thirteenth release on H+P and Infinitikiss's first official album on the label.

Formed in 2006, Run Dan Run started as a collaboration between songwriter Dan McCurry, founder of Hearts & Plugs, and programming specialist Nick Jenkins, with guitar player and bassist Ash Hopkins to join later that year. I had the privilege of being introduced to RDR when I was a freshman at College of Charleston; one of my friends was fully engrained in researching up-and-coming bands back then and burnt me a CD that included "Your Name Escapes Me" and "Enough for Crimes" from their 2007 debut album, Basic Mechanics, which she picked up at a house show. The band went on to release 27 Coming St in 2009 (an acoustic EP recorded in Dan's living room) and the lyrically driven Normal in January 2012, often considered a revisit to the themes of Mechanics but with a focus on more adult subject matter, as exemplified in songs like "Finger & Fist" and "Fresh Faces." In 2012, RDR was recognized by both Paste Magazine and Shuffle Magazine as a band to watch and were chosen to represent South Carolina on The State of Music the same year. Although Dan has taken a brief hiatus from releasing new material and now centers his efforts on H+P with his wife and business partner, Megan Elger, he is unequivocally one of the pioneers of Charleston's modern music scene.

Mr. Bonetangles led his third intermission performance, which segued into the final set of the evening from composer Infinitikiss in honor of Mr. Jenkins' Greatest Hits album release. After gaining notoriety from his involvement with Run Dan Run, sound designer Nick Jenkins released a variety of solo recordings under the moniker Mr. Jenkins before officially deciding on the name Infinitikiss. "The significance of the name change is one of an ego evaluation as well as an attempt to be more open to what the universe may have in store for me in terms of collaboration and progress,"  Nick pontificates. "Infinitikiss has more of a potential for philosophical ponderings, collective mindfulness, as well as more room to develop as a conceptual art project. The name change also feels more accurate as I continue to work with others, especially when assembling a unit that is larger than myself."  Bouncing around between studies in soundscape and experimentation with jarring, borderline cacophonic sounds set to a backdrop of laptop folk and angular melodies, Nick's music is completely unpredictable and manages to keep listeners intent on hearing more. Greatest Hits is a collection of some of his best work—spanning more than 30 releases from 2009 to 2015—that has been mastered by Kenny McWilliams of Archer Avenue Studio in Columbia. To add to the overall experience, Jenkins frequently encourages audience participation at his shows, ranging from the grandiose (concert-goers setting their phone alarms to go off simultaneously) to the spontaneous (inspiring everyone to jingle their keys in sync with the rhythm): "In the spirit of LCD Soundsystem, Talking Heads, Steve Reich, Phillip Glass, Prince & The Revolution, The B-52s, and musicians who have found the science to help a group of people come together, to bounce around, to feel good about life, etcetera, Infinitikiss aims to provide the world with a similar service. [I want listeners to] shed the layers of self pity, discard the self doubt, shake off the shouldn'ts, let your inner rhythms resonate with your fellow neighbors', let love rule—it gets less weird the more you practice. The main destination is forward. The main fuel is loving kindness."

The Hearts & Plugs Redux Residency has had phenomenal success over the past few shows, and Nick reflects on how far the label has come since its early days. "I'm really proud of Megan and Dan," he says, beaming. "They've taken the label and vision to a further place than I ever could have imagined, really. Charleston should be proud to have them around." To express their gratitude, Dan and some band members of Hearts & Plugs presented Nick with a brand new computer on stage after his old one got damaged, signifying the community spirit prevalent not only between musicians but between Charlestonians, too.

You guys, there are only TWO shows left! Cosmic-country rockers SUSTO grace the stage tomorrow, April 8, with Midwest transplant and all-around good guy Johnny Delaware to celebrate their split vinyl release. Shows are $7 in advance and $8 at the door. As always, beer and wine are available for those 21+, and be sure to grab some merch while you're there, like this limited-edition tee designed by Megan Elger. 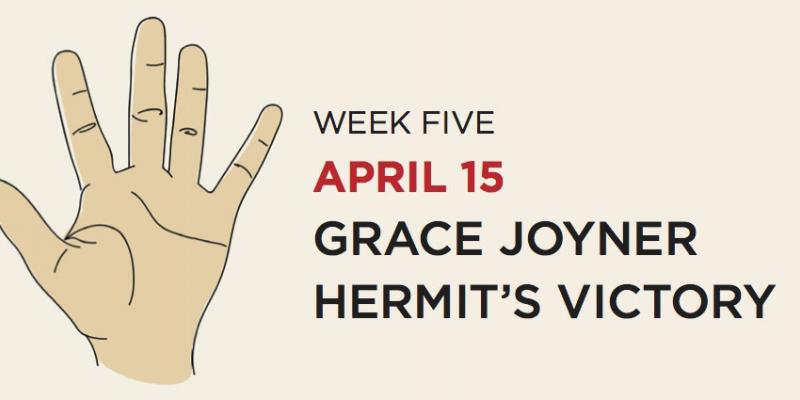 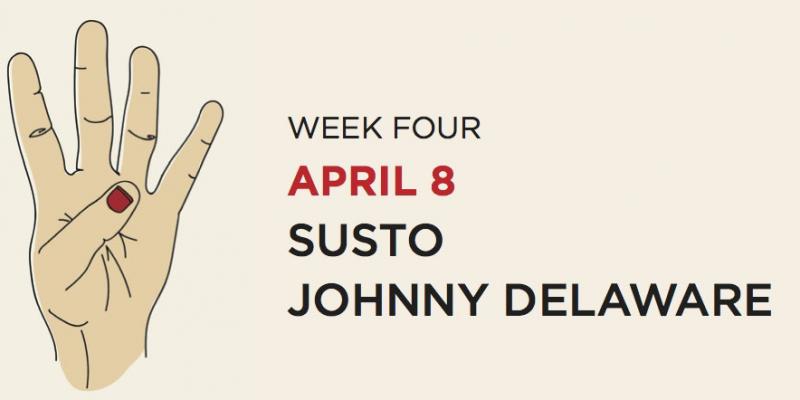 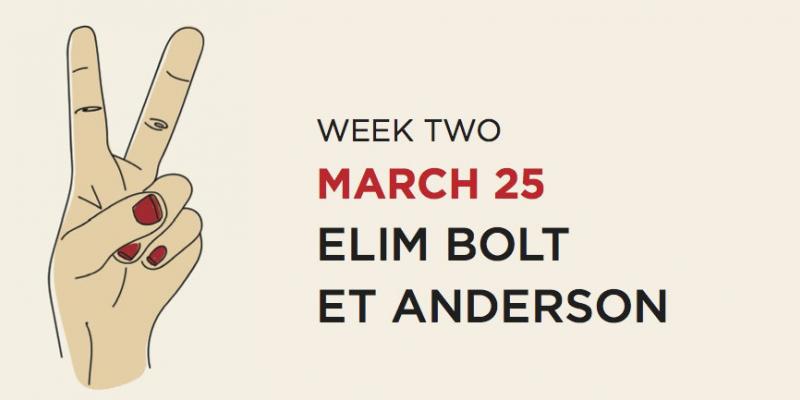 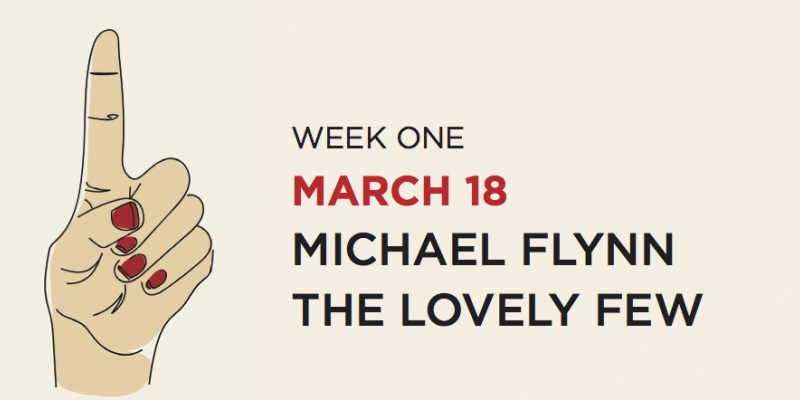 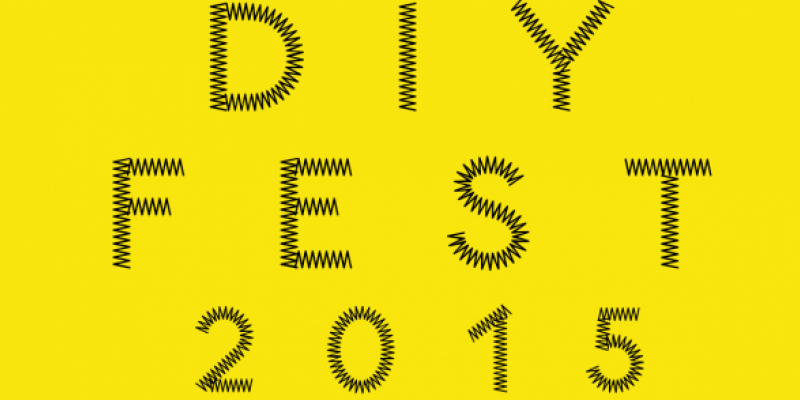 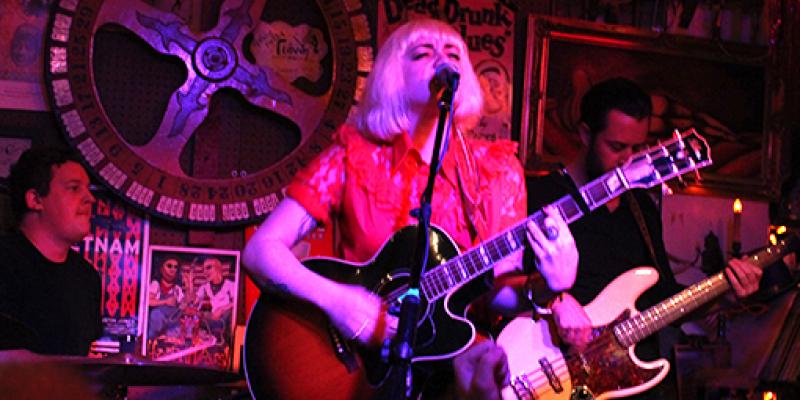