Each year the Carolina Cup SUP Race in Wrightsville Beach, NC, draws the world's biggest names in stand-up paddleboarding. Competitors from across the globe, from Australia to Tahiti to Hawaii, gather to test their paddling merit against the best in the world. The intensity, excitement, and friendship among the paddlers is palpable. This is the Boston Marathon of paddleboarding, the fastest-growing sport in the world. And this year, the deck was stacked with one of the most competitive fields in SUP racing history.

The large paddle board companies have pro teams at this event, as well as brand ambassadors, and the super stars of the sport, such as Connor Baxter (world No. 1 in SUP and 2015 winner of the Ultimate Waterman), Danny Ching, Annabel Anderson (women’s No. 1), Sonni Honscheid, and Georges Cronsteadt (2015 No. 3 Ultimate Waterman) fly in from the corners of the globe. 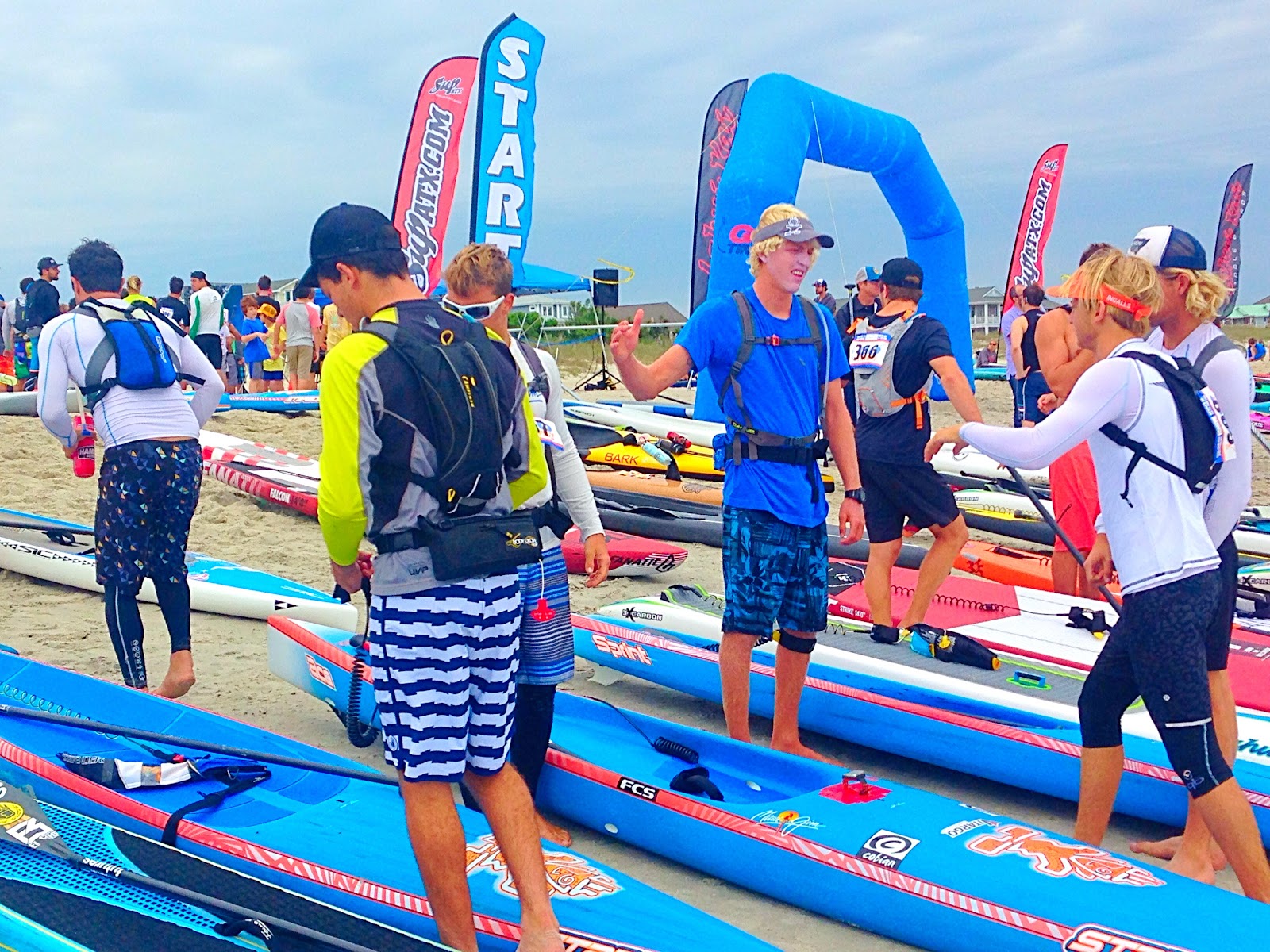 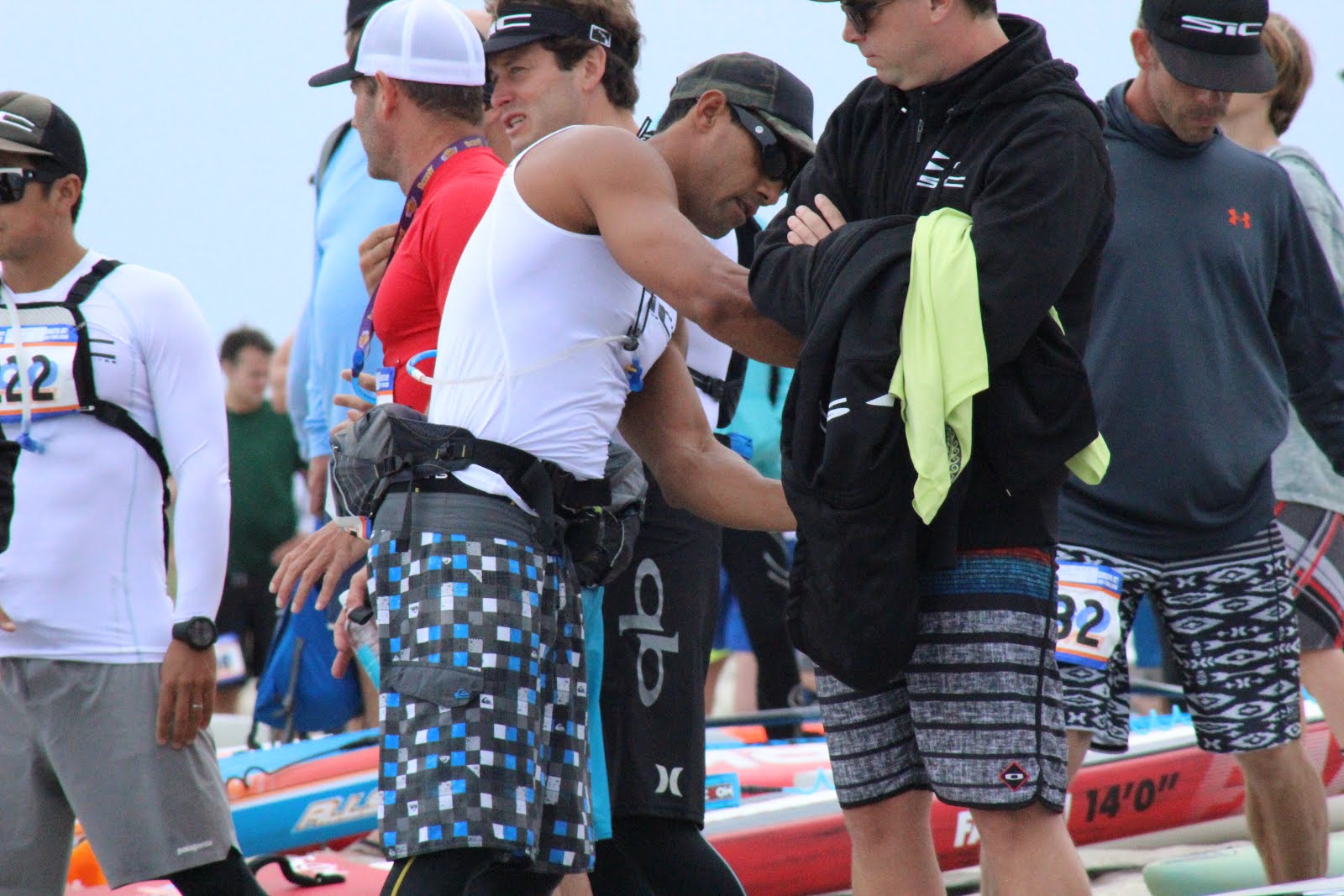 This year, a large crew of Charleston paddlers made the trek to North Carolina to take the challenge and test their skills against the best in the world. And this year, Charleston’s paddlers made us proud. 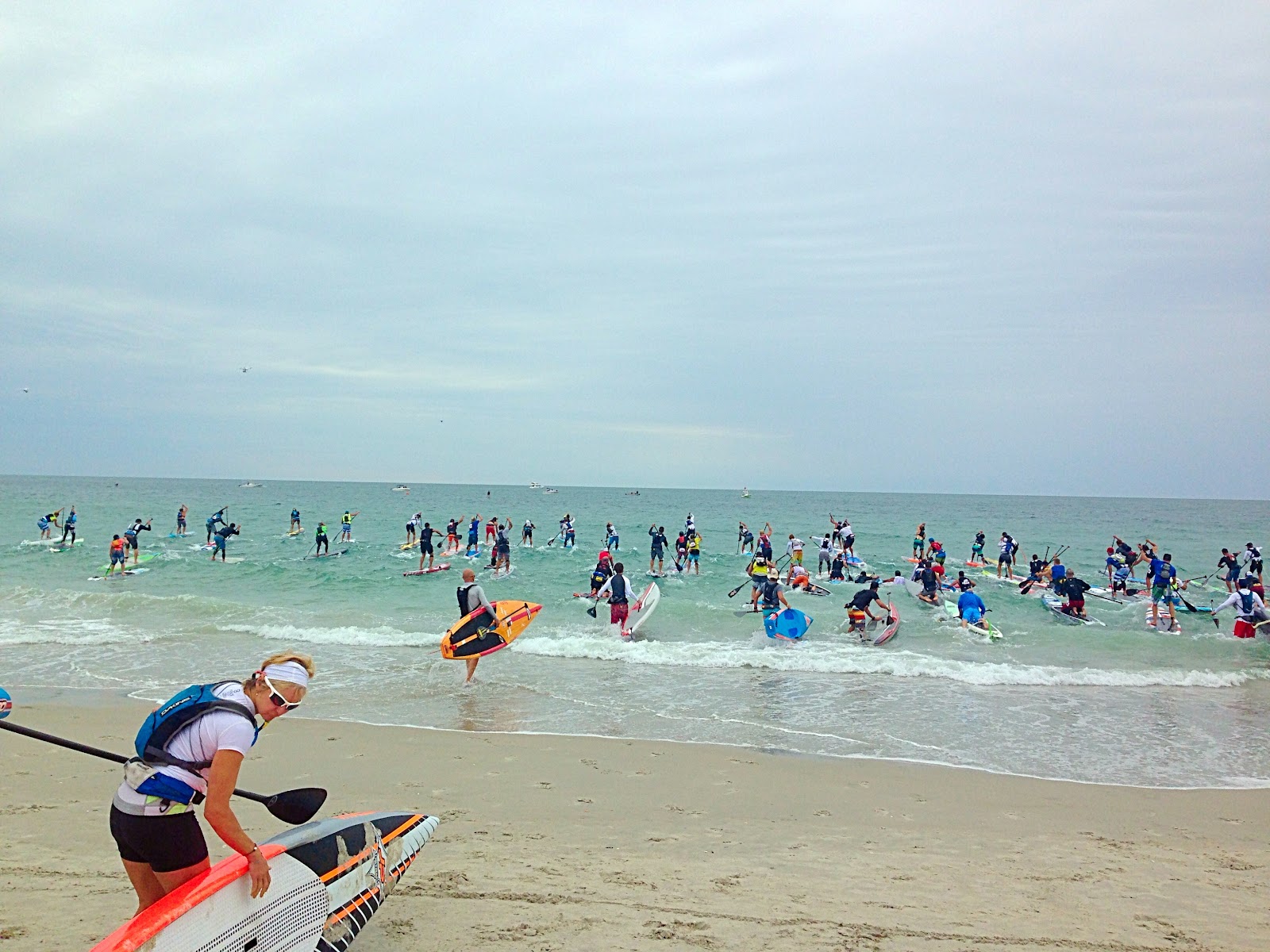 Adam and Amy Clark are the parents of eight children. Screeeeech. Yes, I said eight children. But this fit, hip, atypical American family plays hard together. Adam is the owner of Atlantic Esthetics Dentistry in Charleston. Amy is a 'stick of dynamite' who originally got the family into racing paddleboards three years ago. This year, their 14-year-old son, Caleb, decided he wanted to race the elite 13.2-mile Graveyard course—on a prone board. 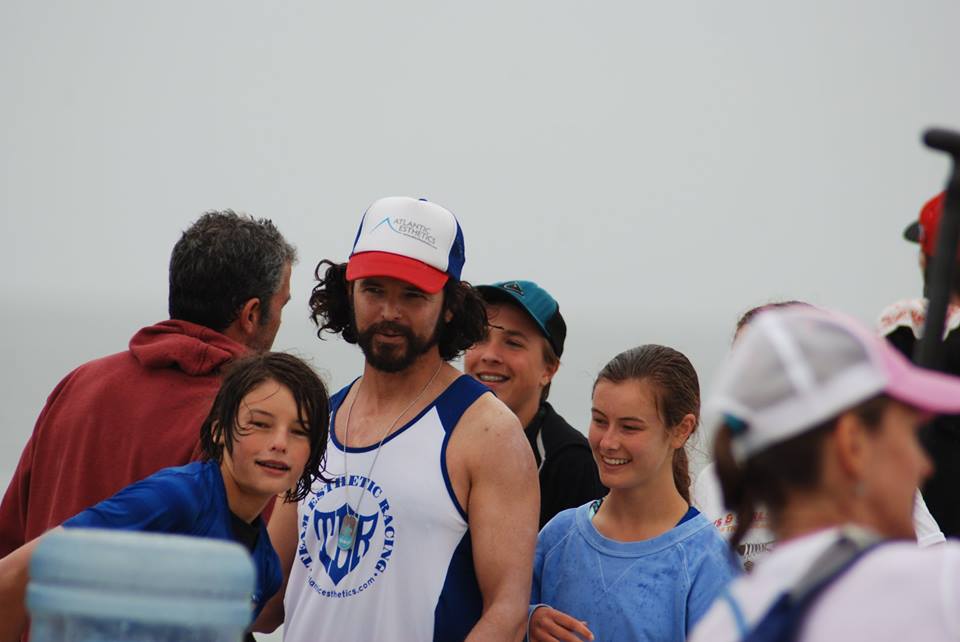 "There is a huge physical and mental difference between stand up and prone paddling," Adam explains. “There are two positions from which you can paddle prone—on your knees or lying on your stomach. Both positions require you to paddle with both arms instead of a paddle. Lying on your stomach, you are straining your neck. On your knees, you are straining your legs." For young Caleb Clark to complete the Graveyard on a prone board with a group of elite men, this meant committing to paddling for 3.5 hours, a monumental task, even for any adult. 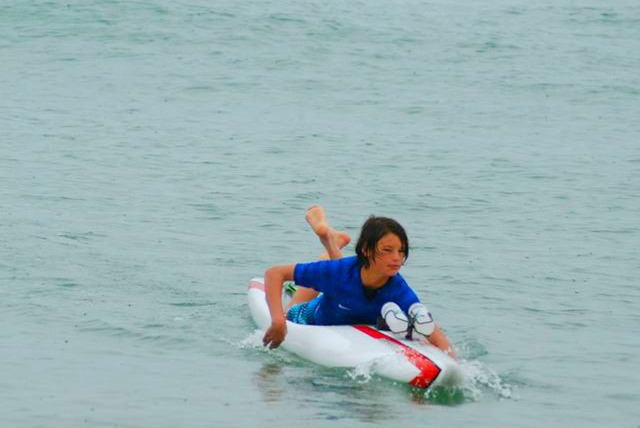 "Caleb didn't train for speed," the father of eight describes Caleb's preparation. "He trained to mentally be on that board for 3.5 hours at a time. Setting a goal and completing it was a larger moral lesson for him. You set out to do something, you start to do it, then you find out it is very, very difficult. There were a few moments when Caleb even thought, 'This might be a good time to back out.' " But the 14-year-old paddler persevered and made it to Wrightsville Beach for the Carolina Cup. "The high point for Caleb was showing up to the beach on race day, and Zeb Walsh (the overall men's prone winner) turned around and said to him 'Are you going the whole the whole distance with us, Grommy?' " Caleb realized what he had proverbially bitten off, but fear didn't stop this teen and he completed the race in 10th place on prone in 3:39:44. 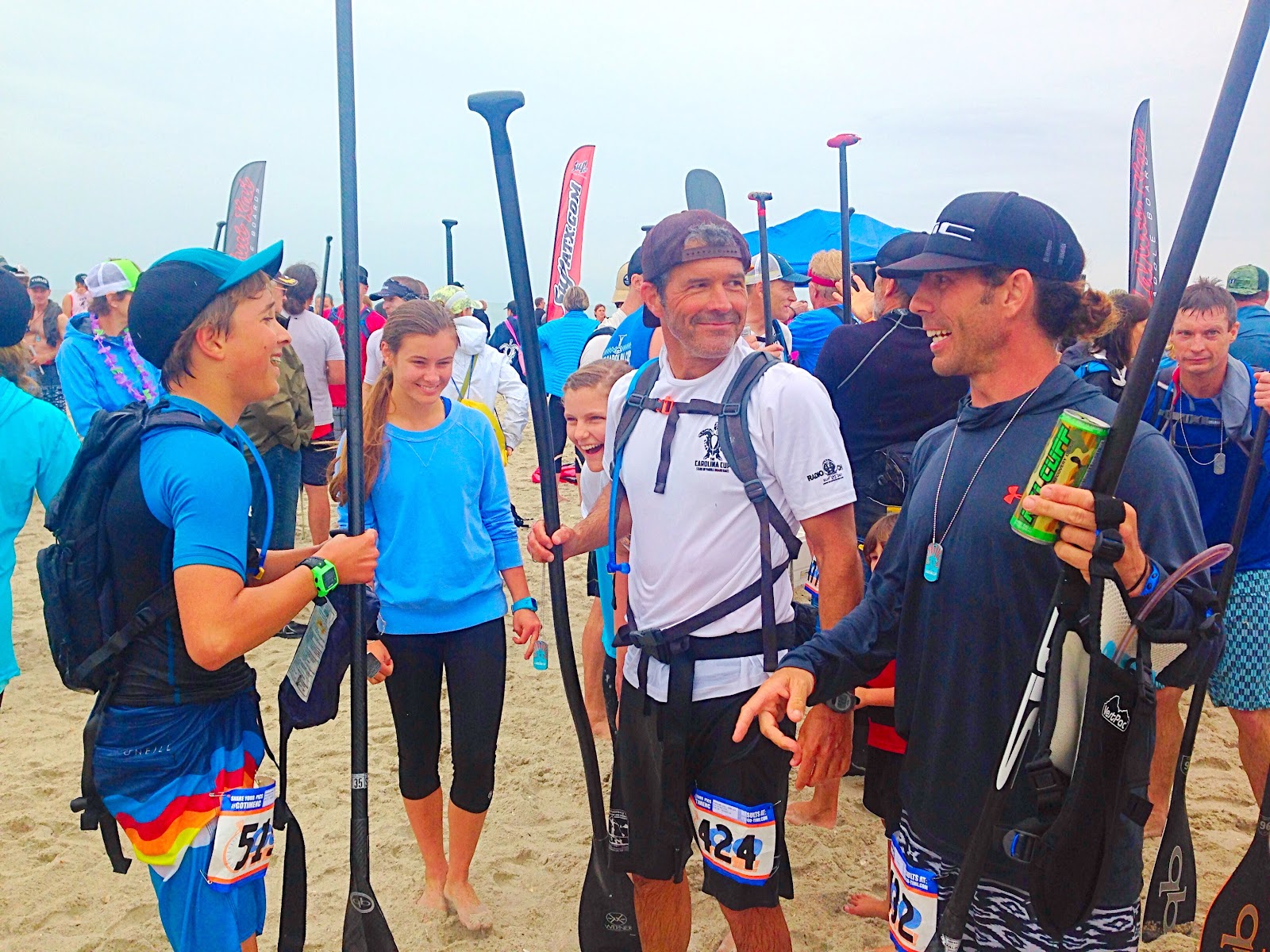 For Caleb's parents, these critical life lessons are often best taught out of the classroom and on the water. Adam says he doesn't view their ability to do water sports together as a family as an exclusive thing, but as a privilege. Adam completed the Graveyard course on a 12'6" SIC race board, while Amy, also an accomplished racer (who was still nursing their newborn son Elias for this year’s cup), plans to race with Caleb in the fall. 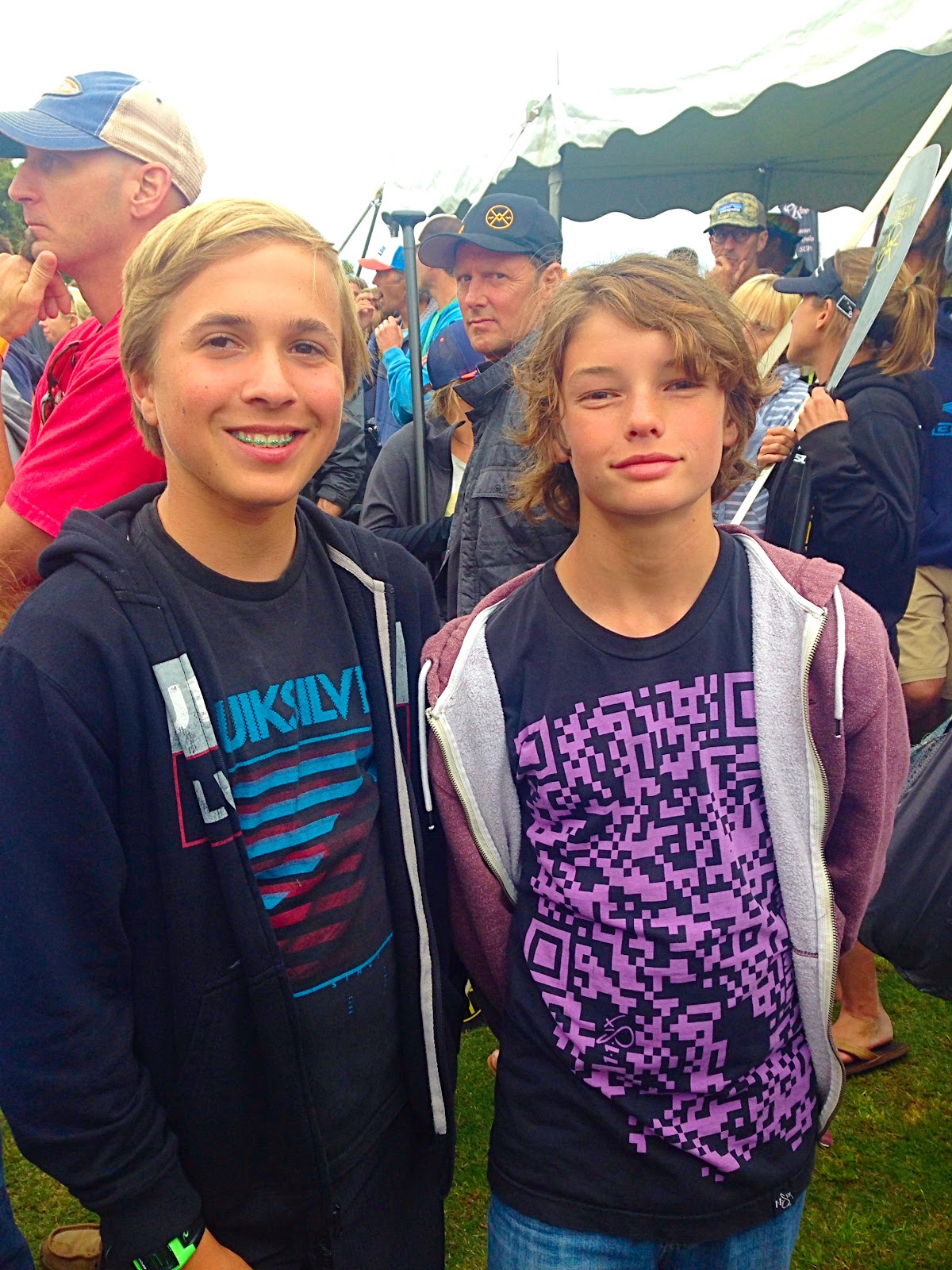 Another Charleston teen, Dylan Alderman, whose parents Don and Jenny are both accomplished watermen and women, trained for months for the Graveyard as well. I spoke with Jenny and she detailed the rigorous training schedule Don and Dylan went through as father and son. "Don mainly wanted to focus on the ocean in Dylan’s training [as opposed to flat water]. They would often paddle at Kiawah Island and Folly Beach, in conditions that made me nervous at first." She continues, "But after the difficulties of the ocean and wind conditions on race day, I was glad Don had prepared him."

On weekends, Don and Dylan would do five- to eight-mile downwind runs and practice cutting into the inlet to simulate the Graveyard course. After school, Dylan would paddle one to two hours with his Dad starting in January, as many as 10 miles, in up to 20-mile-per-hour winds, both downwinding and going against the wind.” 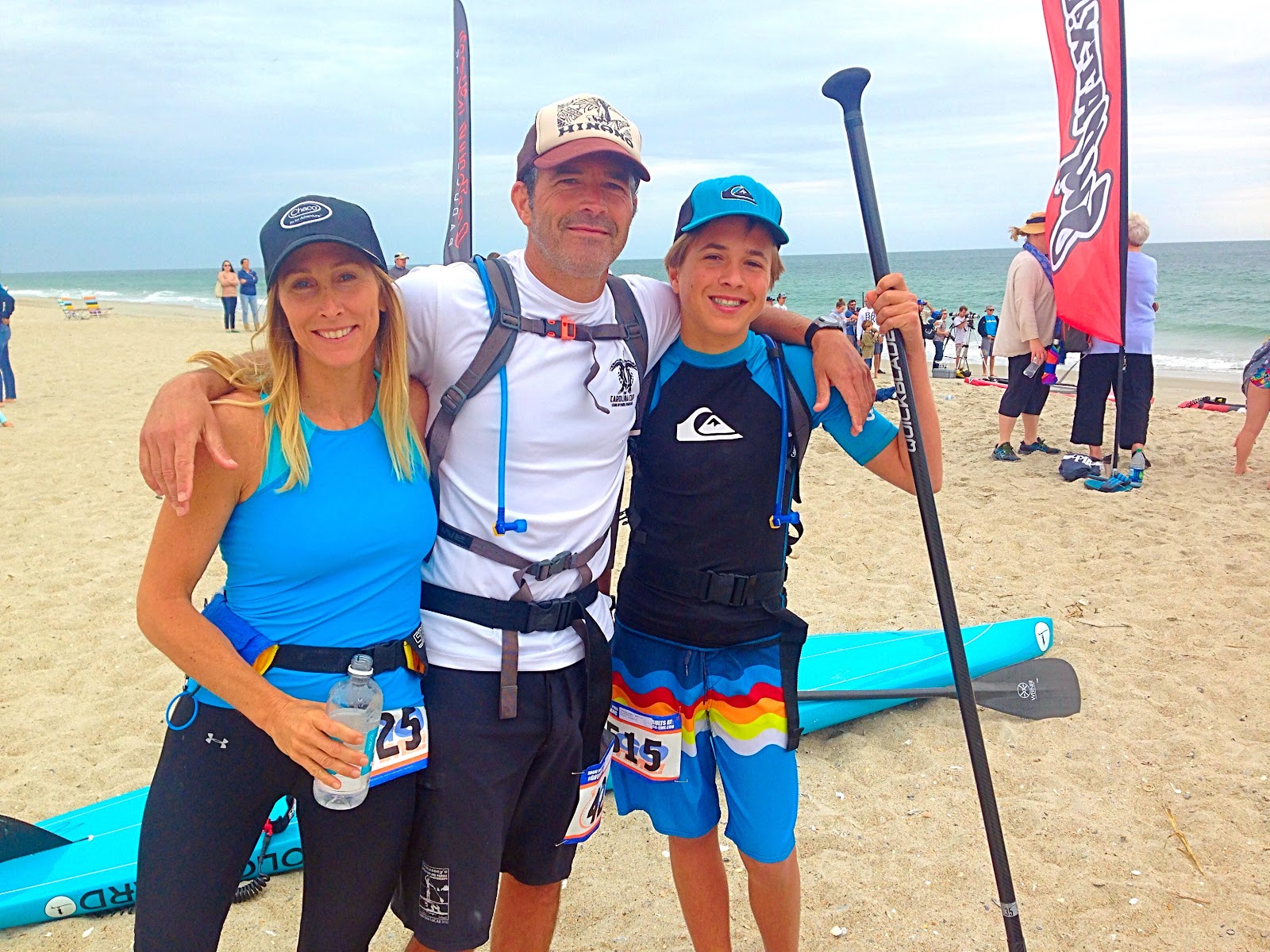 "To be fair," Jenny admits, "Dylan did draft [follow in the wake of a paddle ahead of you—a major part of flatwater racing] his Dad. But you have to be able to keep up the draft—you have to work hard to hang on." Jenny, who also paddled the Graveyard on a 12'6" board at the Cup, was on a draft train as well. Further, you cannot draft in the ocean—the ocean portion of the races all about individually managing wind and waves. Jenny saw Dylan and tried to catch him on the final ocean portion, but the 14 year old was too fast. "He still beat me. It was bittersweet. I knew this day was coming, the day my son would beat me, but there it was."

Dylan showed up on April 25 to race on a 12'6" stand up, with his father, Don, at his side for the race. The whole family, including youngest son Jack, raced paddle boards on Saturday. Jenny finished the Graveyard in 18th place for women on a 12’6” board (finishing on the top 20 for this event is a big deal). 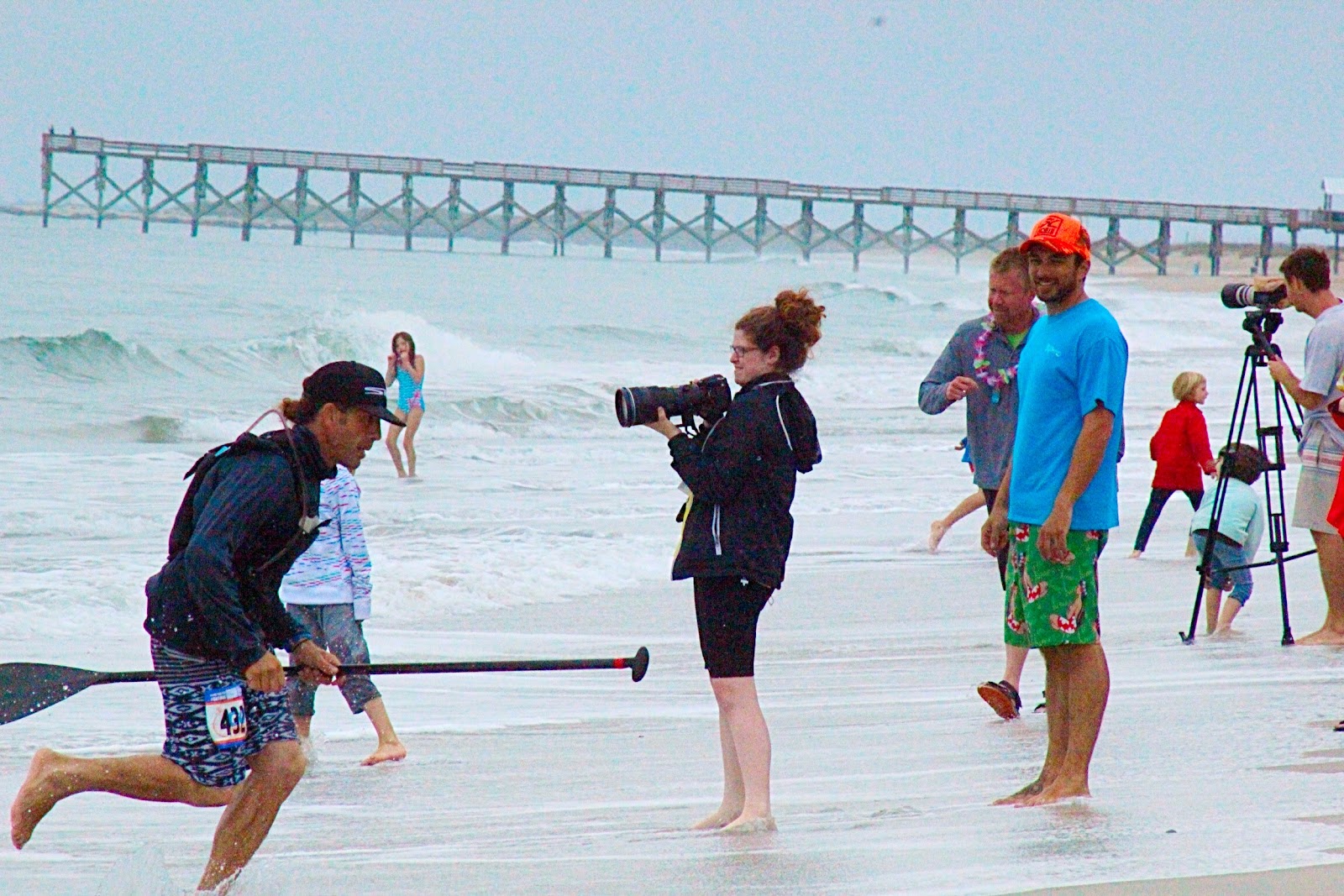 Two Charleston paddlers, Corey Taylor and SIC Maui brand Ambassador Jeremy Whitted, finished in the Men’s Elite 14’ Graveyard course in the top 50 out of 151 in this field. This means top 50 in the world. These men were competing against full-time pros and the top SUP paddlers on the planet, many of whom finished only just before these Charleston athletes. James Island’s Justin Schaay placed second overall in the men’s 14’ 6.5-mile Money Island course, and several Charleston women were on the podium for the 3.2-mile Harbor Island Race. 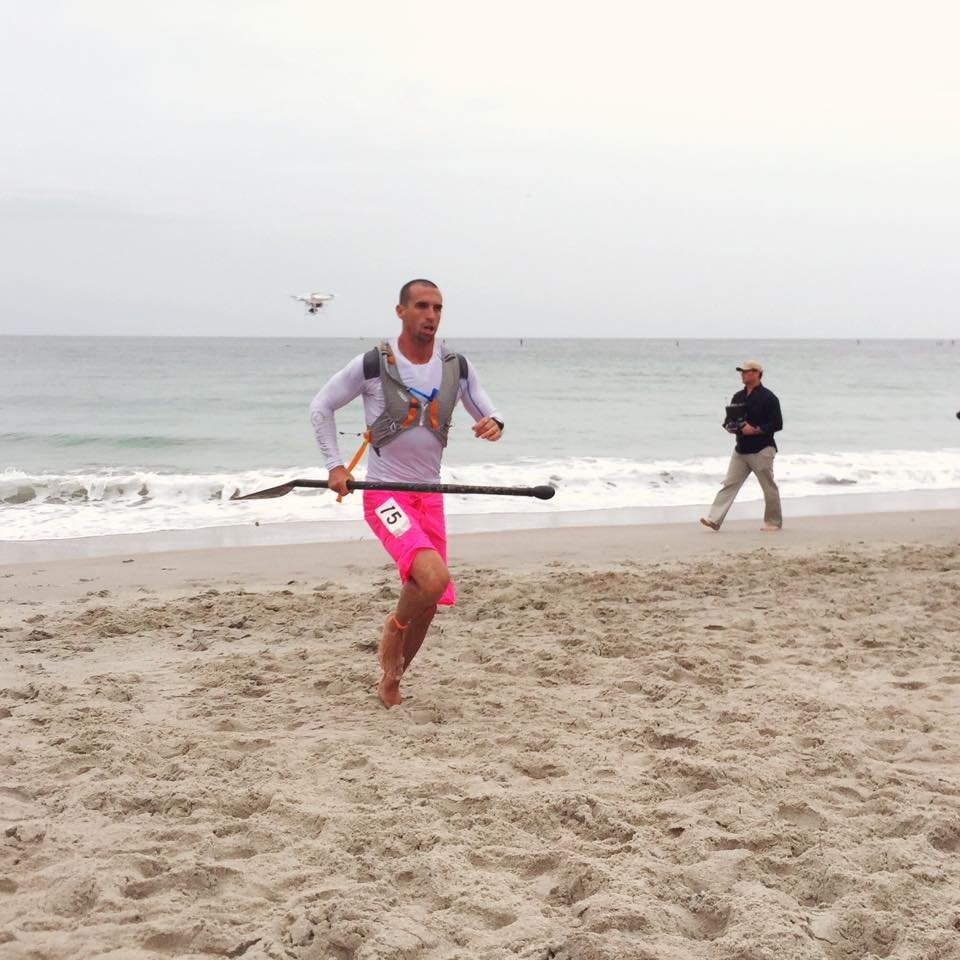 You can feel the community among paddlers at SUP races. The big SUP “stars” have remained humble, generous, and approachable, keeping a pure love for the ocean and a passion for the sport in the forefront. The fast-growing sport of SUP provides one of the best no-impact, full-body workouts out there, and is perfect for young who kids who might not be interested highly competitive team sports, such as soccer, basketball, or baseball. Paddleboarding is also terrific cross-training for runners and cyclists. 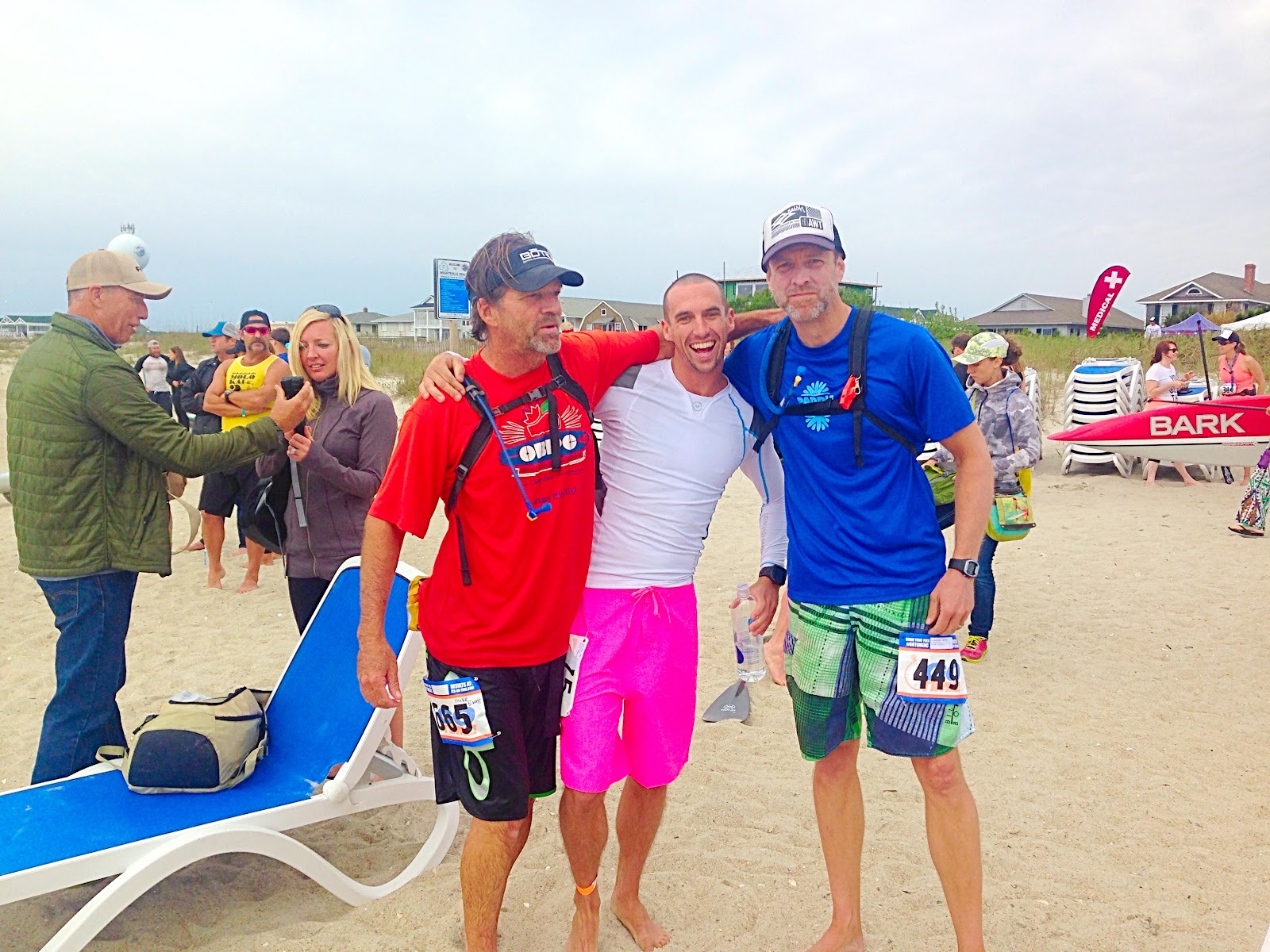