Who's Ready to Splurge?! Part 1

While some responsible (read, boring) people just throw it in the bank and pretend like it's not even there, others put it toward things like getting out of debt, paying for those renovations to the house, putting a down payment on a new car, finally replacing those bald tires that could've killed you for the past three months, etc.

What I'm here to say, though, is screw all that (kinda—be an adult and cut some debt) and splurge on that super luxe and expensive high-fashion item that you've been coveting for a while. Everything you saw coming down the runway back in September will be hitting stores soon, so treat yourself to something and don't feel guilty. We deserve nice things every once in a while. So as long as the neccessities are taken care of (shelter, cheesecake, utilities, etc.), please feel free to partake. I now present to you in no particular order, my top 10 tax-return splurges for men. 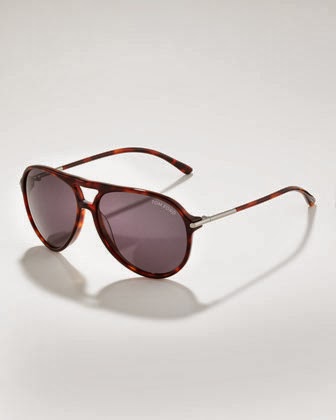 Long before Jay-Z gave Mr. Ford his seal of approval by naming a song after him, Tom Ford has been churning out a strong assortment of suits and accessories. In the eyewear game, he's easily in the top five. These aviators are a good pick because they're prime for the warm weather that's coming soon. Also, you can't go wrong getting them in the classic tortoiseshell frame. 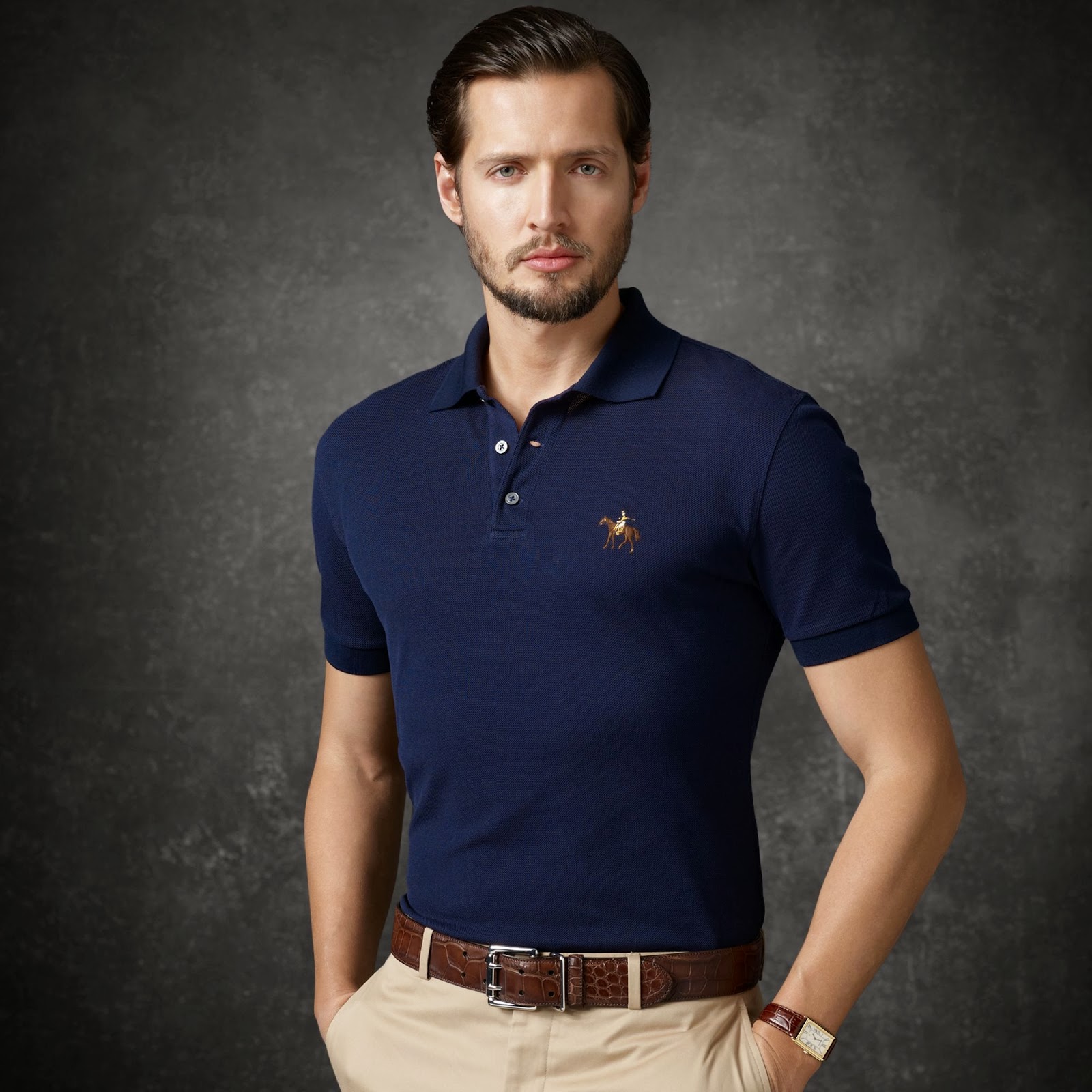 Just about everyone and their mother owns a Ralph Lauren polo. They can easilly be picked up at a T.J.Maxx or Marshalls for $20. But I personally have never come accross anyone wearing one of the kind above. How is this superior from the ones you see everyday? I can pick out three reasons. First: It's got mother-of-pearl buttons, not plastic. Second: It's made in Italy, not China. And lastly: The logo is much more exclusive than the regular pony you see every day. I'd be willing to bet that most people wouldn't even recognize it as Ralph Lauren when you wore it. And that's what I like about it. 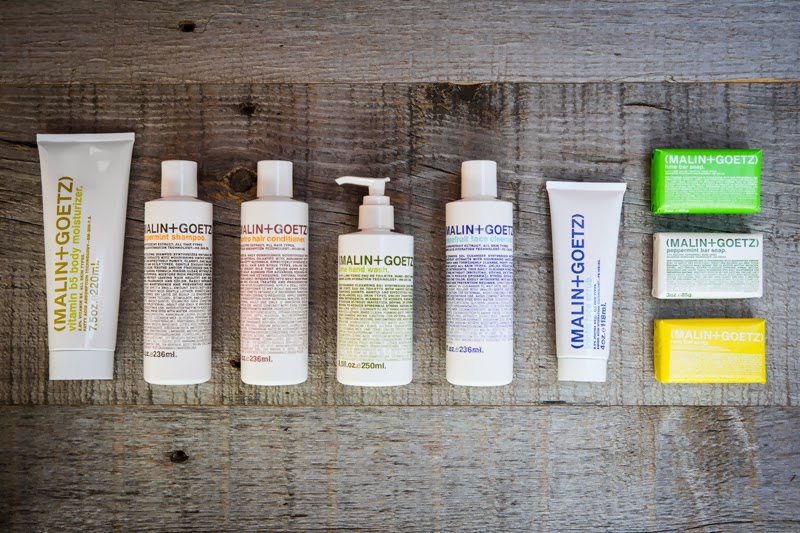 As much attention to detail as I pay to clothing and all things related, I probably have the quickest face routine ever heard of. I have no loyalties to a specific face wash, face lotion, body lotion (I just learned you shouldn't use the same lotion for both...), body wash, etc. As of late, I've been trying to spend a little more time in that area. After all, a lifeless mug and ashy hands are unattractive.

Malin + Goetz is a brand I've been hearing about for some time. It doesn't hurt that they're bottled simply. It's a relatively new brand that started in 2005 by two guys Matthew Malin and Andrew Goetz in New York. And their use of only natural ingredients has helped them capitalize on everyone's new desire to "go green" and use "from-the-earth" products. While they don't actually sell this stuff as a set, I've compiled a list of 10 bathroom products that every man should be using: SPF 15 Face Moisturizer ($48), Vitamin B5 Body Moisturizer ($38), Bar Soap ($10), Eucalyptus Deodorant ($18), Rose Hand + Body Wash ($20), Vitamin E Shaving Cream ($40), Jojoba Face Scrub ($38), Detox Face Mask ($4)0, Grapefruit Face Cleanser ($30), Mojito Lip Balm ($12).

And as a plus, you get three free samples with every order over $75. This is one on my personal list that I can't wait to scoop.

Over our lifetime, we've all had that uber-generic luggage set from Sears. Or maybe you have a huge gym bag that you've kept from your collegiate sports playing days done in your respective school's colors and logo. Either way, one thing is for certain: our luggage has not properly aged with us. It's time you start carrying something a little more grown-up. Lotuff Leather, formally known as Lotuff & Clegg, has been churning out all types of leather goods from the mighty state of Massachusetts since the 70s.

Out of all the duffles they produce, this one is my favorite. It's big enough to pack nearly a week's worth of clothing, yet you can still carry it on with you on a flight. It's also great for days when you need to carry a change of clothes stylishly, or maybe just something to keep all your daily crap in and toss in the backseat of your car. This is the kind of bag that you can beat the ish out of it and it will continue to look better with age. 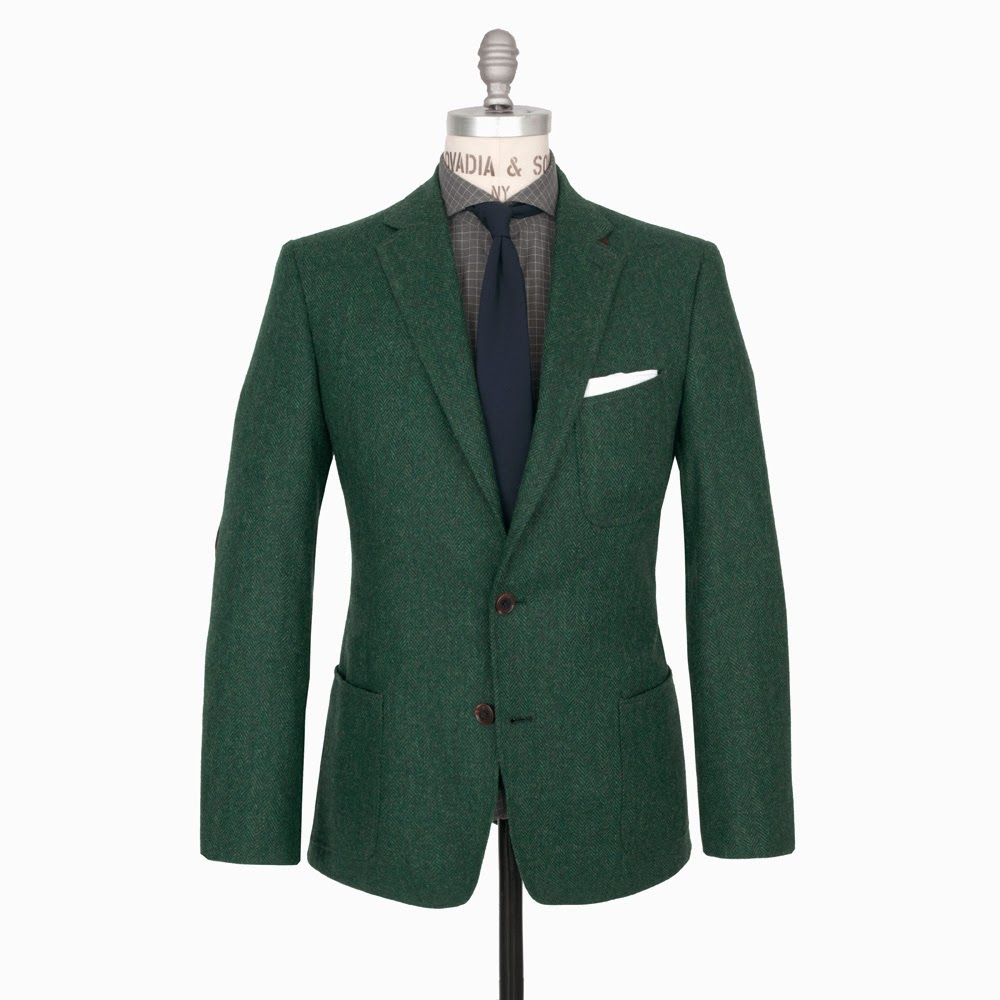 If you've already got your hands on a good navy blazer for March to November weather and a go-with-everything-in-the-winter grey tweed blazer, then now's the time to experiment a little. Take a chance on a different, yet easily wearable, color. Think of this deep green as the crazy, whacked-out cousin of navy blue. They're pretty much interchangeable when it comes to coordinating with other colors, but since blue is used so much more than the green, it comes off looking fresh and new. O&S has been on my radar for some time now as they continue to put out strong collection after strong collection. Give it an honest try and you'll be surprised by how many things it will go with. 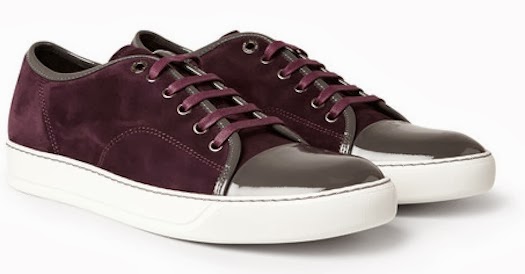 Lanvin sneakers have taken on somewhat of a cult-like following after GQ Magazine said it was okay to wear sneakers with a suit a few years ago. These suede and patent leather bombshells are luxe simplicity at its finest. They offer this style in six colorways, and while I would most likely lean toward the grey version for its versatility, the burgundy pair is whispering sweet nothings to me. 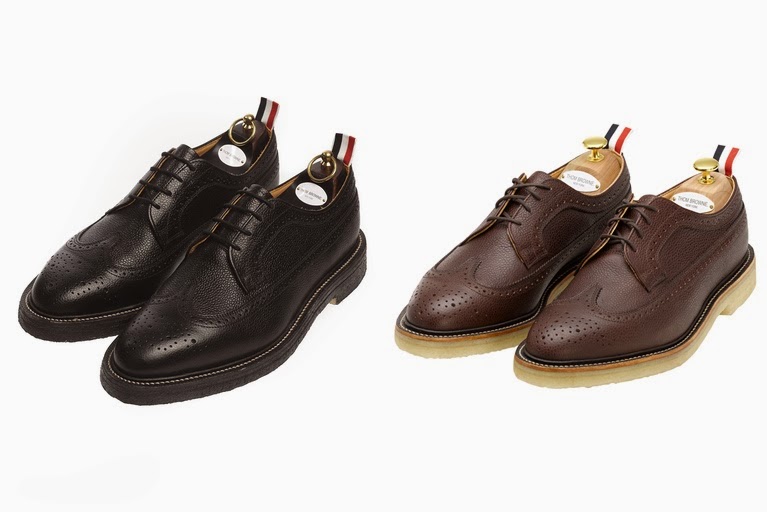 If you've ever taken the time to scroll through some street style photos from Italy's biannual menswear trade show Pitti Uomo, you may have seen a large percentage of the attendees wearing a pair of Herman Munster-sized shoes with a dainty tricolor tab on the back. They are the work of Mr. Thom Browne. You will definitely get your money's worth because these will literally go with everything from your dark denims, casual chinos, and dressy trousers to—for the brave—a well tailored pair of shorts. They come in two colors: black and brown. Flip a coin and take your pick—it's a win-win situation. 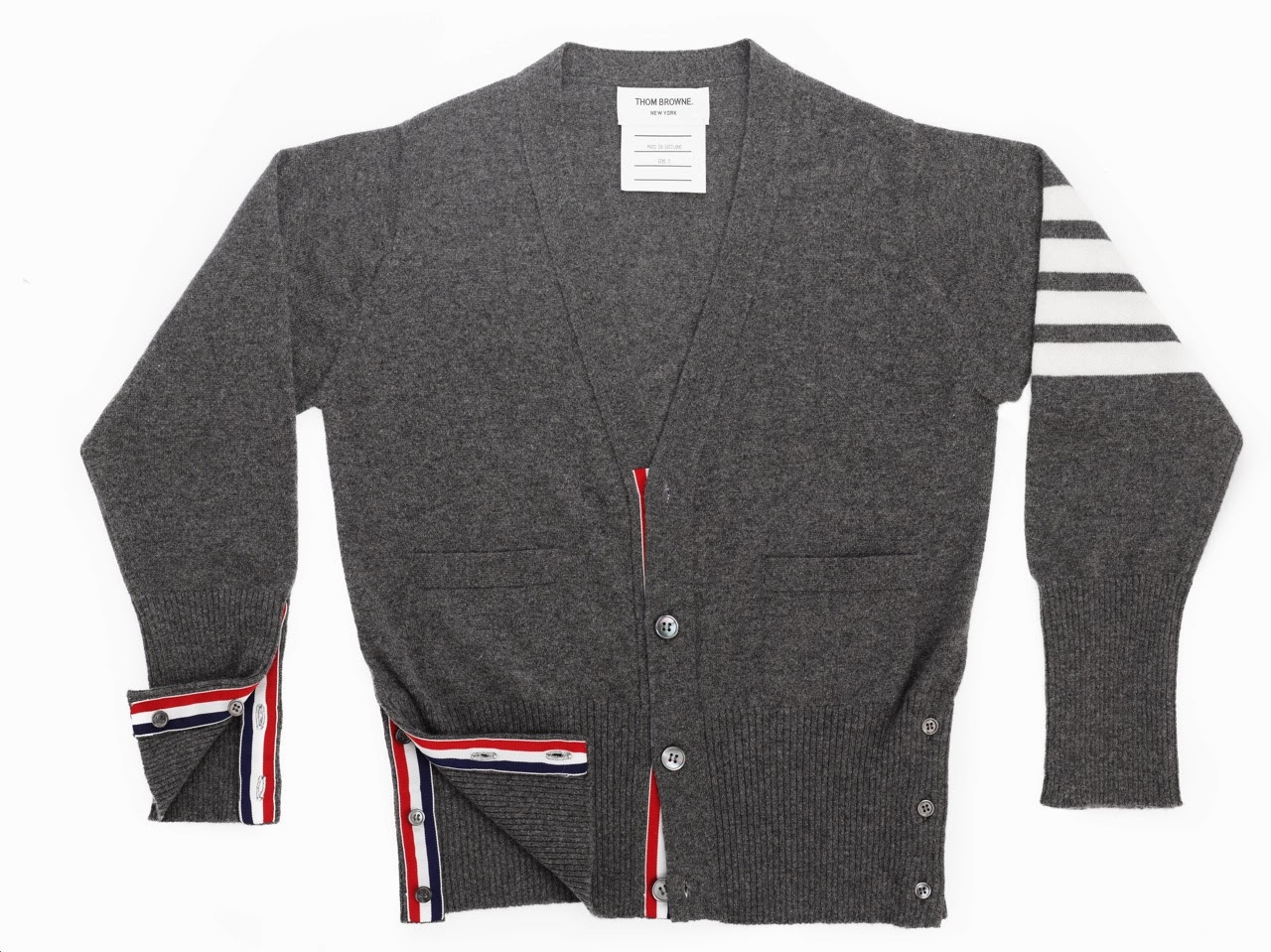 Let's keep the Thom Browne gravy train rolling. If you thought $1,000 was too much for a pair of shoes, than save $5 and cop this cardigan. Done in 100 percent cashmere, this thing will feel so good on your skin it should be a crime. Great for throwing on top of a tee or a polo on windy days, it's also slim enough to wear under a blazer for some extra warmth where it counts. Adorned with the designer's signature tricolor accent, it's a thing of beauty. Here's your chance to own a piece of wearable art.

If you're like me and have begun to—dare I say it—yawn at American mags, treat yourself to a few of these. They're the gift that keeps on giving (for a year, at least). While they are dirt cheap in their native country, attatching airfare to these things jacks their price—like a $6 magazine turns into a $20 magazine. Multiply that by 12 issues and a yearly subscription is nearly $250. The three that I have my eyes on are Popeye, Free & Easy, and Brutus. If wifey says it's okay, I'm pulling the trigger on one or two of these. 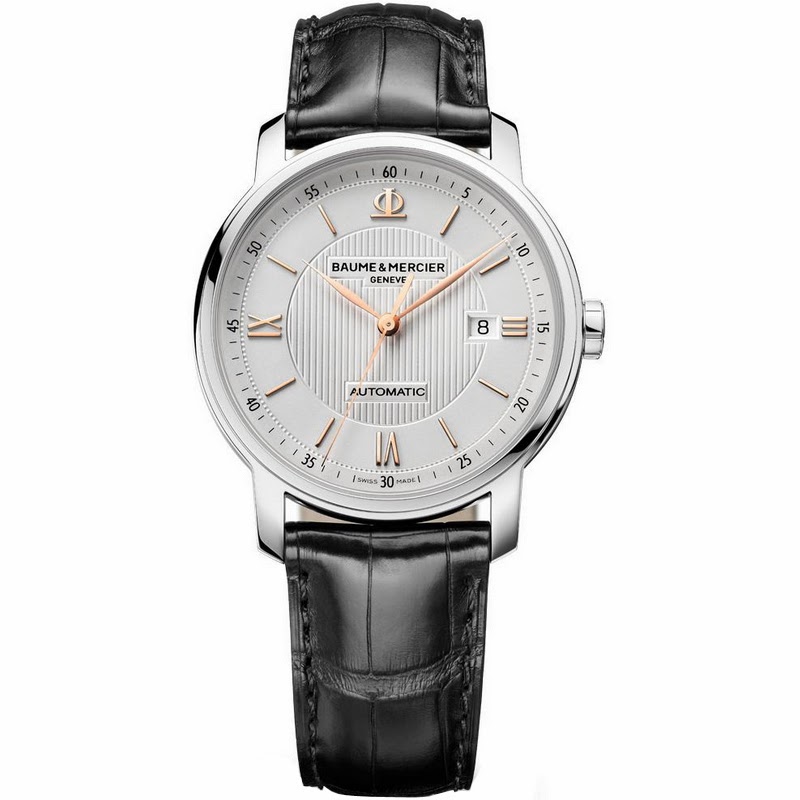 I purposely saved this one for last. From what I've read, watches pretty much come in two categories: The $4,000+ category, and everything else. If that's truly the case, then consider this one the best of the rest. It's made by Baume & Mercier, a Swiss watch-making company that's been around since 1830—so they kinda know what they're doing. It features a stainless steel case and a real alligator-skin strap, and it's automatically self-wound (the second hand "sweeps," it doesn't tick). It's elegantly designed with virtually zero bling, so it complements your formalwear and beefs up your casual wear.

Plan ahead for this purchase—it's not something you just roll out of bed one morning and pull the trigger on. Depending on your situation, you may have to save for a while on top of using the majority of Uncle Sam's withholdings. But you will be rewarded with something that just may outlive you.

And so there you have it. My list of 10 things to treat yourself with. You can pick something from the list or use it to spark an idea for something else you want. But let's all agree to not be boring and save every penny. Like I said in the opening, be an adult and take care of some debt first, but then feel free to use some of it to bless yourself with something you otherwise wouldn't normally get. Happy shopping, folks! And stay tuned for later in the week when I give you my top 10 list for women.