The weather report stated “100% chance of Thunderstorms by 10:00 am,” but for the brave souls who dared the weather, Sunday morning provided both sun and surf for the Bodhi’s Revenge Paddle Race on Folly Beach. Hosted by Half-Moon Outfitters, this annual ccean paddle race features a two-loop (Johnny Utah Course) or four-loop (Bodhi Course) ocean paddle, interspersed with three 50-yard beach dashes, paddle in hand. Saltwater Chef was there to give you the scoop. 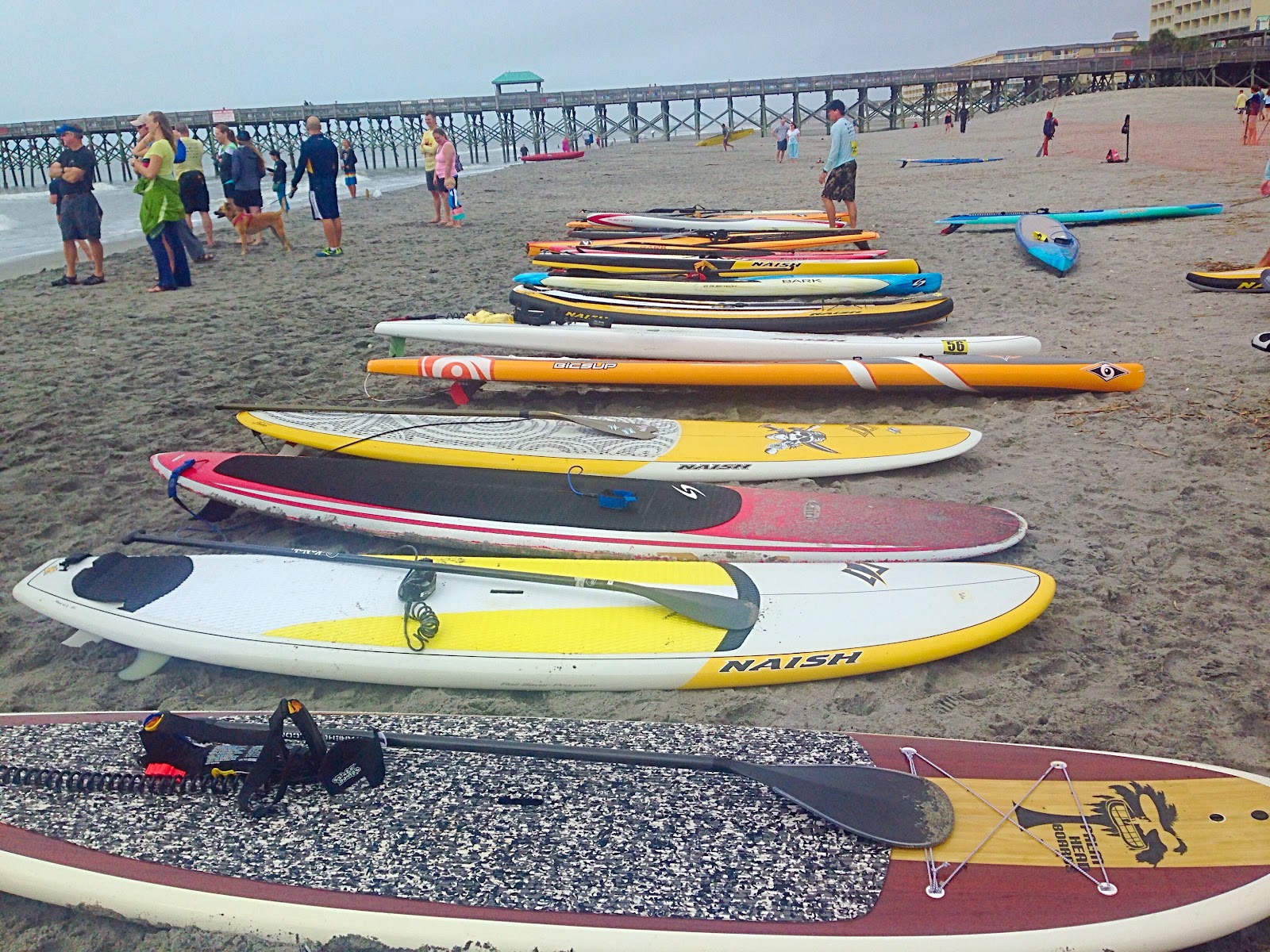 As the stand-up paddle surfers rolled in Sunday morning at high tide, board handlers from the Citadel and race officials prepared the course. Jet ski patrols were on hand for safety. Four buoys marked the challenging ocean course just north of the Folly Beach Pier. Surf star and Naish ambassador Chuck Patterson was at the race to emcee the event, and camaraderie among the stand-up paddle board community was high. The sky was grey and cloudy, but the sun peeked through the clouds and the rain never came. 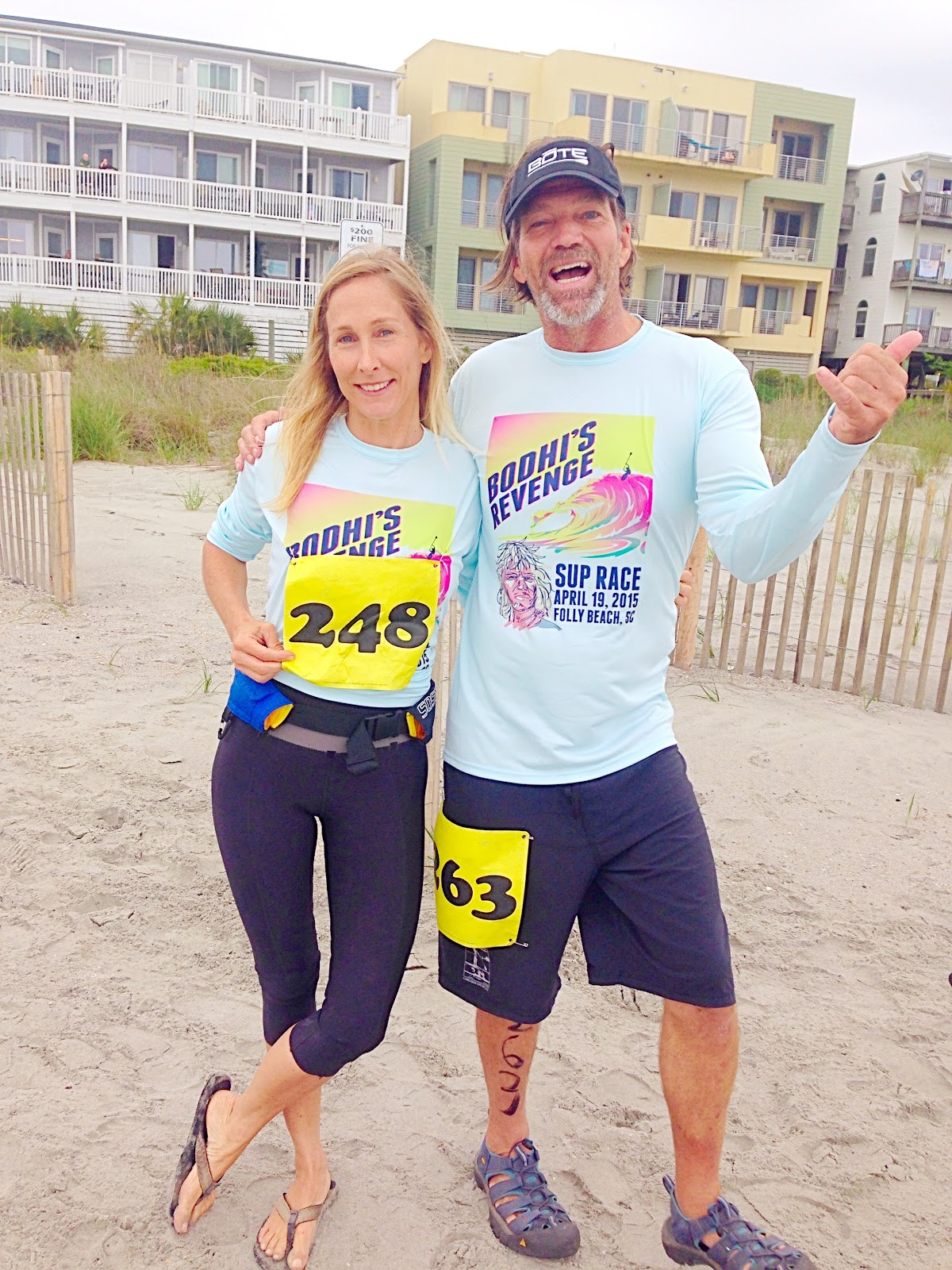 At 9 a.m., the racers launched their paddle boards into the three- to four-foot surf swells. Charleston’s Jeremy Whitted, an SIC Maui and Carolina Paddle Board Co. ambassador, quickly led the pack, followed by fellow Charleston paddler and BIC SUP ambassador Justin Schaay (both men were on 14-foot race boards). Don Alderman of Johns Island led the prone paddle on his 12-foot-6-inch prone board. Jenny Alderman, also of Johns Island, led the women in the Bodhi Course on her 12-foot-6-inch race board, followed by Danielle Goldston. The Johnny Utah Short Course paddlers joined in just behind, where Charleston’s Beth Lovett dominated the women on her surfboard, and Phil Antman led the men, also paddling on a surfboard.

Jeremy Whitted maintained a significant lead throughout the race, finishing the long course in first place in only 34:19, while Jenny Alderman placed first in the women's division, crossing the Bodhi Course finish line with a time of 43:32.

Prone paddler Don Alderman won the men’s prone division, coming in at 36:12, followed by David Mello of Daniel Island. Incidentally, both Alderman and Mello will compete on prone boards in the 2015 Molokai 2 Oahu World Championships, an elite SUP race in Hawaii (this is huge honor for Charleston to have two paddlers in this event). Phil Antman finished first for the shorter Johnny Utah Men’s Course in 19:34, and Beth Lovett sprinted to the finish of the short course women's division with a time of 22:50. 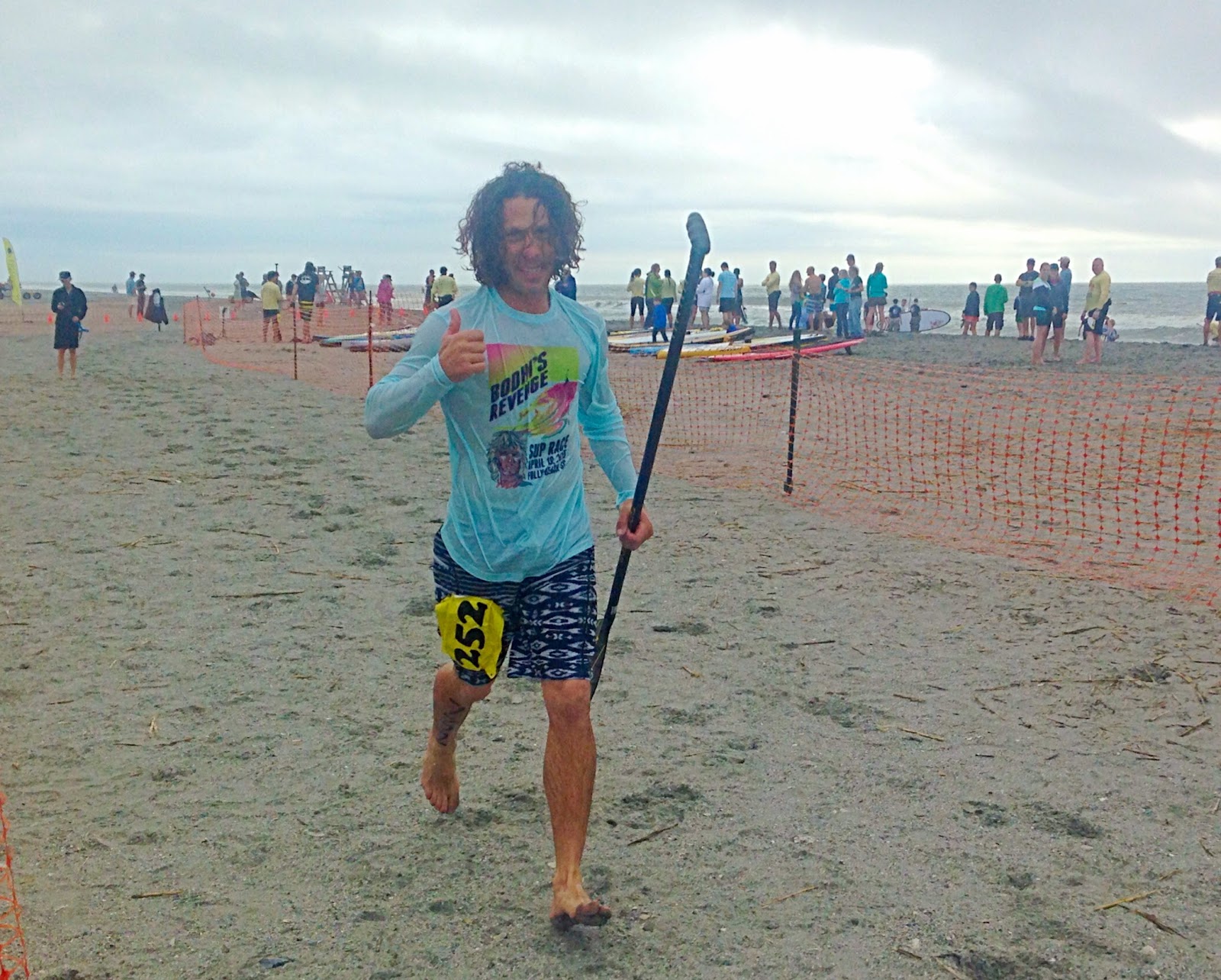 As a spectator, this is an exciting race to watch. The action is high, the pace is quick, and after each loop around the buoys, the paddlers must surf their paddle boards to shore. Handling the surf after each loop around the buoys is the most thrilling part of the race, and successfully catching a wave to shore can gain the paddlers critical seconds. Many of the paddlers—such as Justin Schaay, David Mello, and Beth Lovett—are already experienced surfers, and surfing to the shore on a paddle board is second nature. For others, such as Danielle Goldston, who has only just learned to paddle surf in the past few months, the surf was a personal challenge. Competing in Bodhi’s Revenge meant conquering her fear of paddling in waves. Her courage, stoke, and persistence payed off, however, as Goldston placed second in the Bodhi Course. 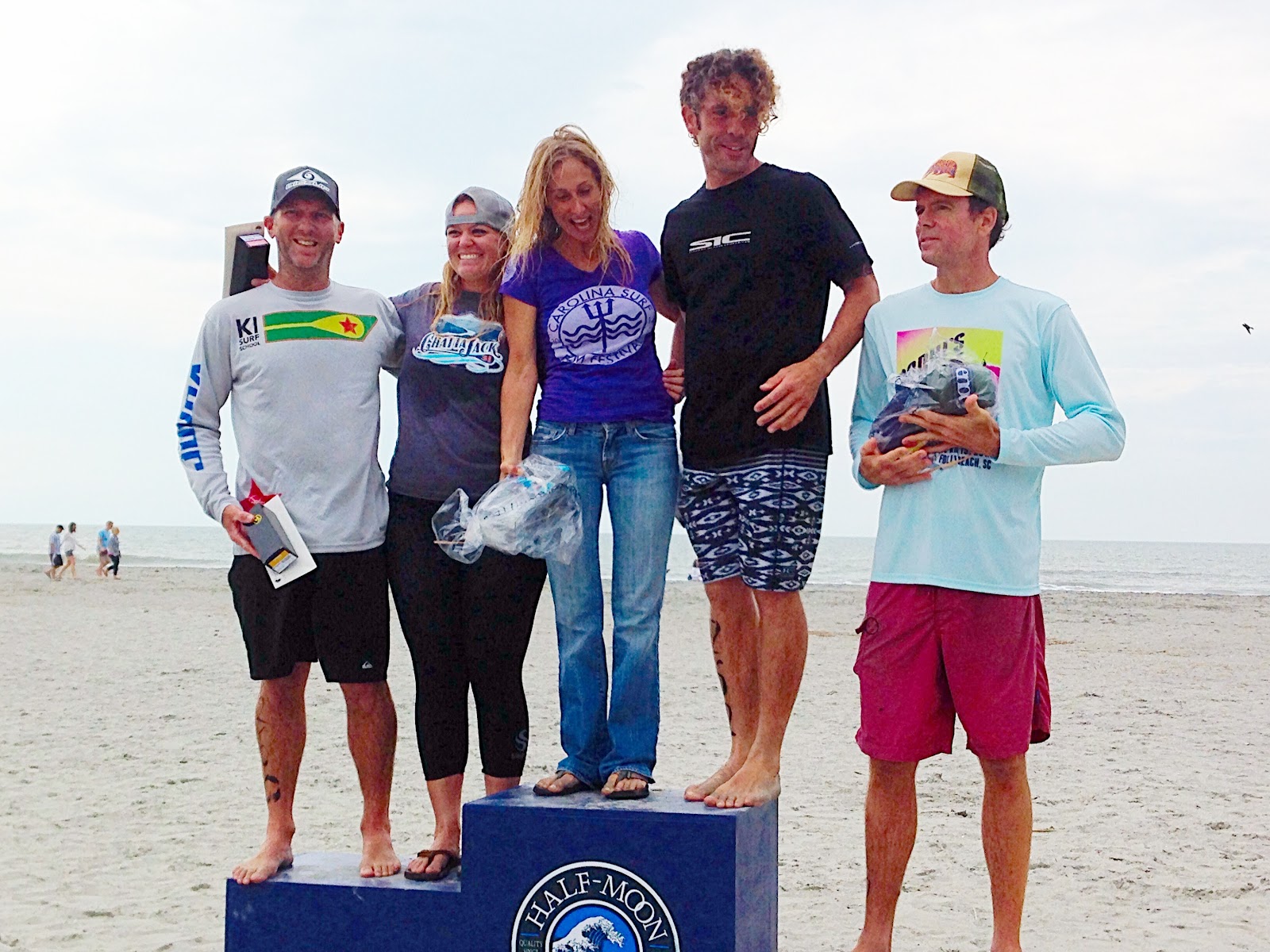 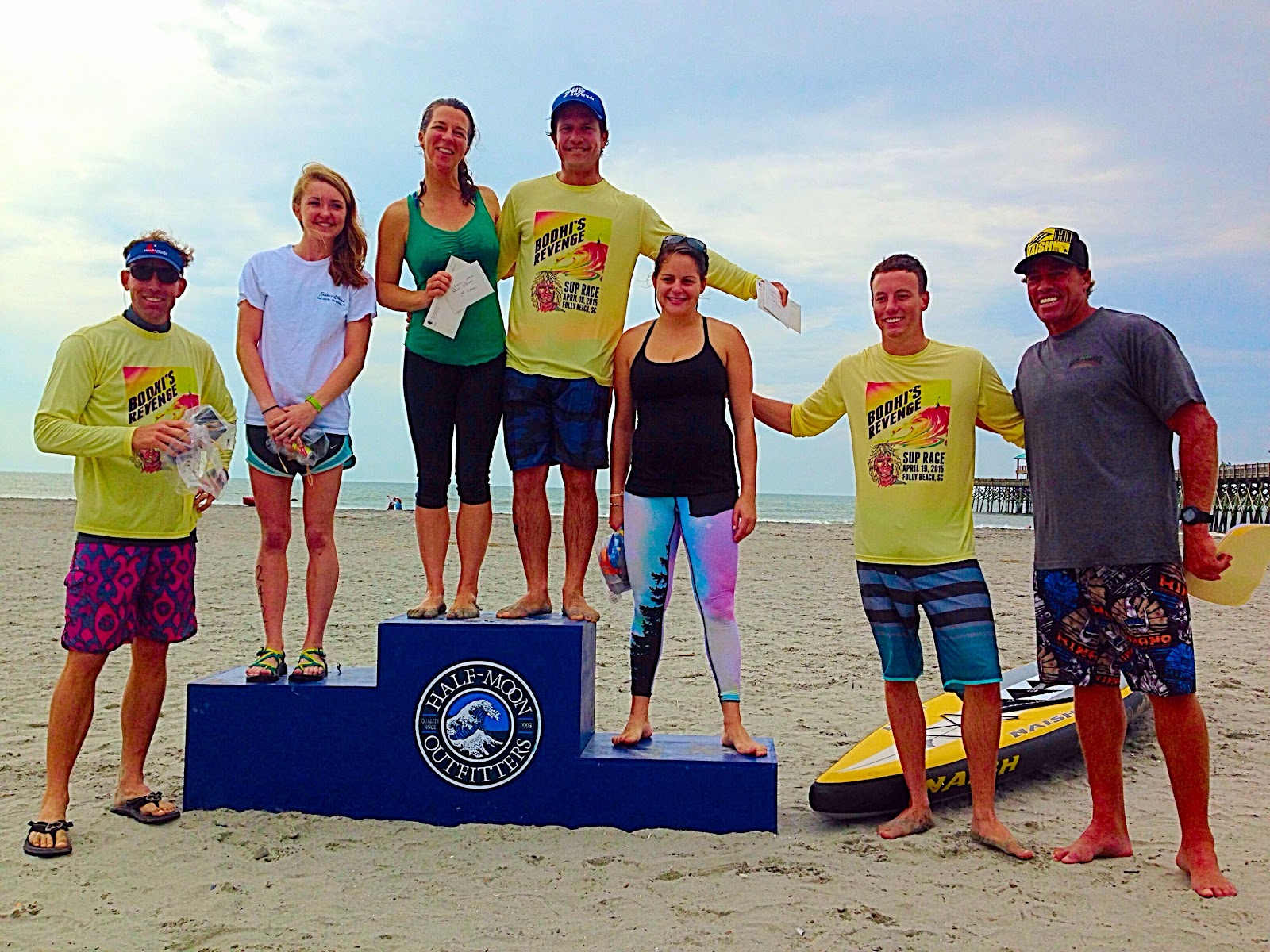 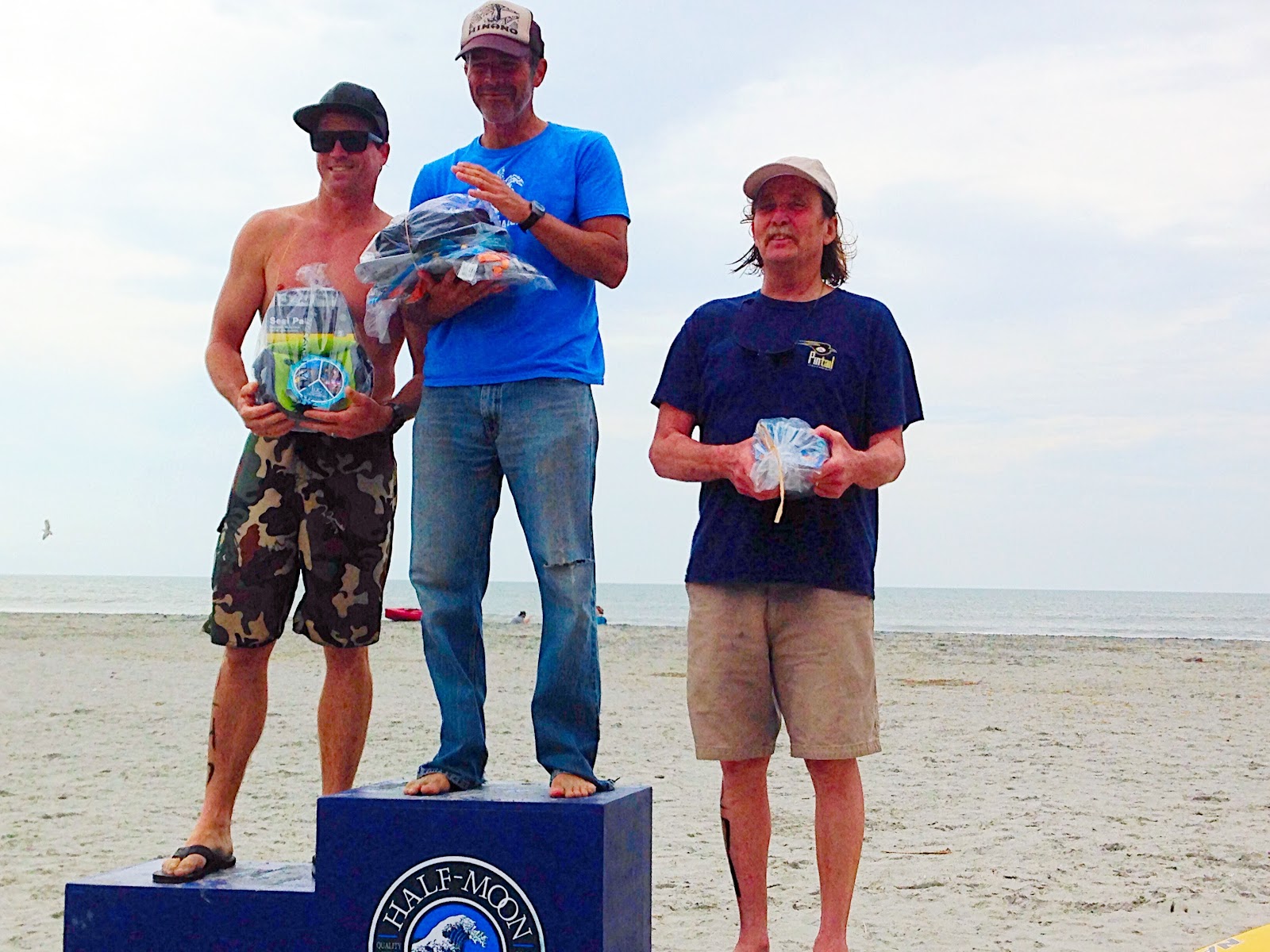 I spoke with the Bodhi Course men’s winner, Jeremy Whitted, after the race, and asked him which he prefers, ocean or flat-water racing. “It is nice to switch back and forth, but the skills needed for open ocean racing are much different.” He describes the challenges in both types of racing, “In flat water racing there is an element of teamwork, it is critical that you ‘draft’ with a group or a team. But if you get behind on a draft train and lose your spot, or are separated by a boat wake, you are in big trouble.” He goes on to explain, “Open Ocean racing is more of an individual sport where you are playing the conditions—the wind, the swell, the waves. In an ocean race, someone can be 20 yards ahead of you and you can catch one ‘runner’ (or wave) and all of a sudden you are ahead.” 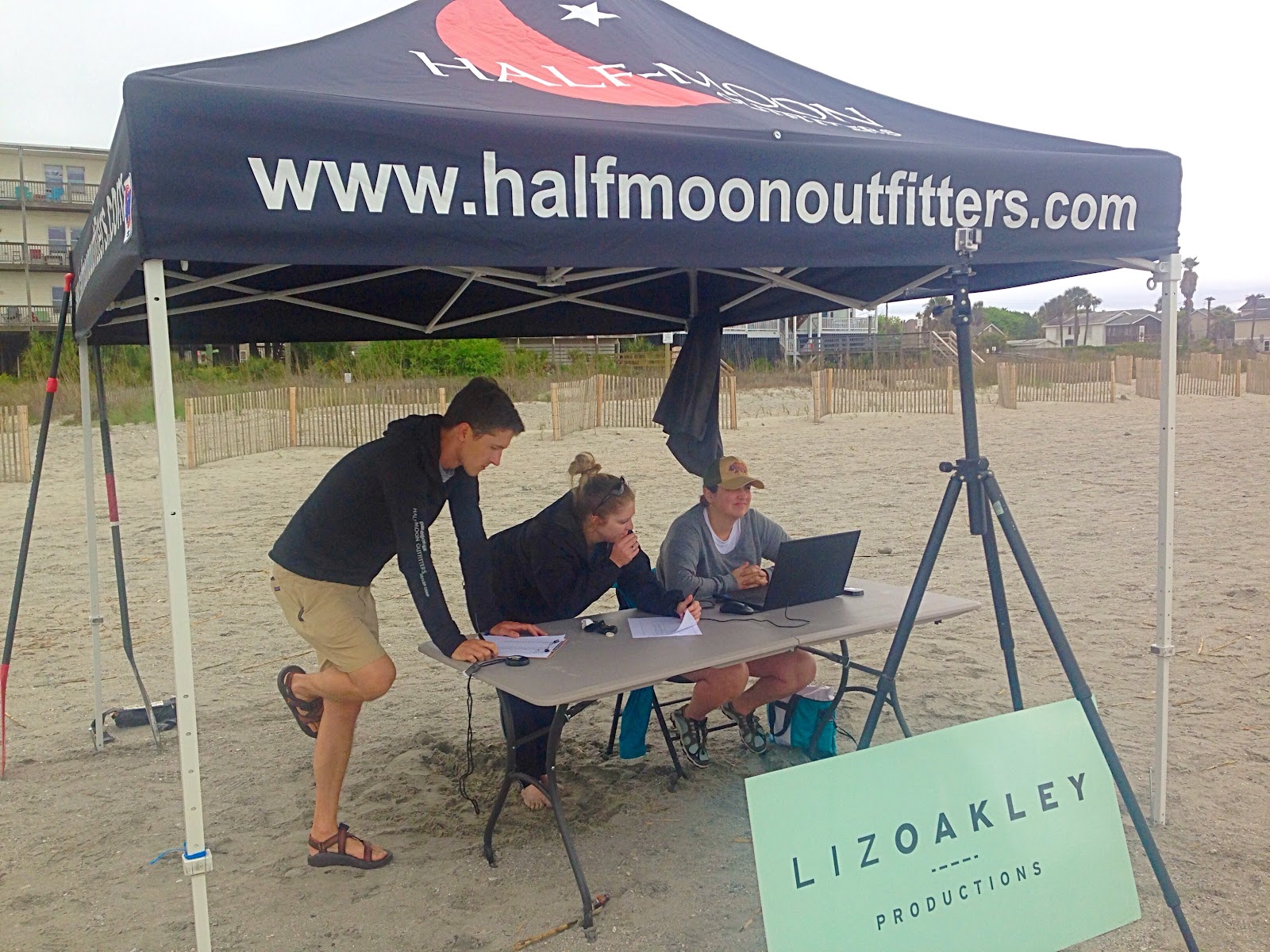 This year’s Bodhi’s Revenge Race was sponsored by Naish, SUP ATX, SurfTech, Suunto, Go Pro, Charleston County Parks and Recreation, and The North Face. Proceeds from the race will benefit the Surfrider Foundation, "a non-profit organization dedicated to the protection and enjoyment of the world's oceans, waves and beaches for all people, through conservation activism, research and education (C.A.R.E.)." (courtesy of HalfMoonOutfitters.com)