After wearing boots and wingtips all winter, it's time to give the feet a break. Let them enjoy a change of pace and lighten the load a bit. How do you do that? If your answer is flip-flops, then I'm going to kindly ask you to walk off a steep cliff into a river of man-eating crocodiles à la Indiana Jones. I'm talking about getting yourself a pair of white canvas sneakers. Canvas is much lighter than leather, and with them being cut so low, plenty of breeze is allowed to circulate around your ankles. By the way, no socks with these please. Last point of emphasis: you can wear 'em casually or you can dress them up (as seen in the split shot). Wear them to everything (outside the office) except a funeral. Scroll down to see the top picks of the season. 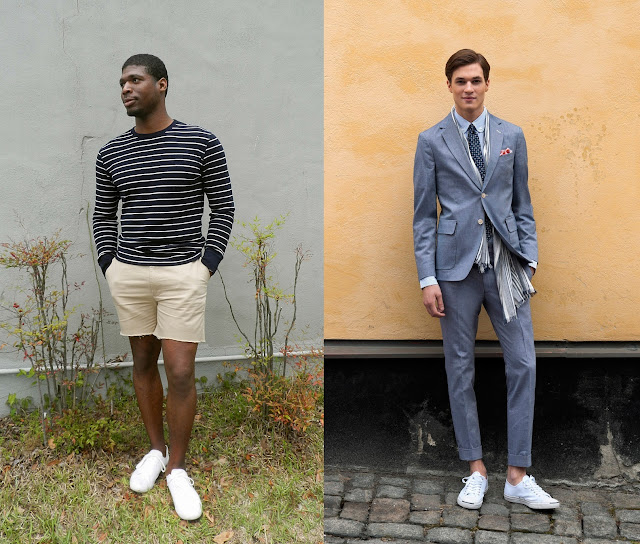 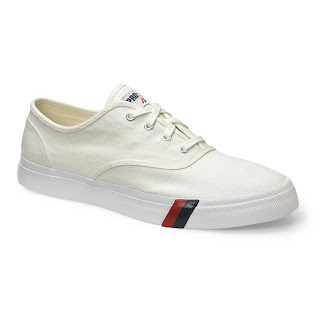 Keds are classics—they've been around forever. You probably had a pair when you were in elementary school. The stripes on the sole give them a little character, and the suckers are dirt cheap, checking in just under a Grant (that's a 50 dollar bill). 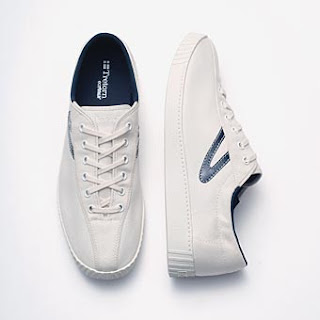 This is another classic pair, originally made famous on the tennis court, I believe. They come in an array of colors but the colorway that they call "white & pea coat" is my favorite. 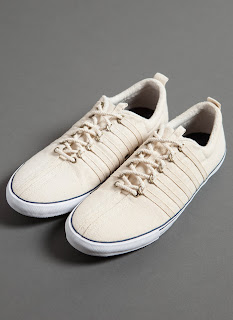 The reigning Menswear Designer of the year has collaborated with K-Swiss to put out a small selection of understated shoe wonders. K-Swiss used to be the butt of jokes when I was in school, but Mr. Reid has helped to give them more credibility. 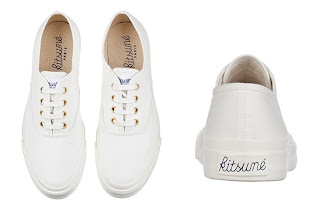 If I had my pick of the litter it would be these elegant babies from Maison Kitsune (pronounced Kit-soo-ney). The French brand is relatively new on my radar as I've really only started paying attention to them over the past year. But they put out some really good looking stuff. I love the script on the back and the gold eyelets are a nice touch.

The most important thing to remember about white canvas sneakers is to forget what you learned when you were younger. It's no longer necessary to keep your white shoes blindingly white. I say ''wear without care." To me, they tend to look better when there's a little life shown on them. And it makes you look less stuffy. I only wash mine once a year. I run 'em in the ground during the spring and summer, put 'em up when it gets cold, wash them, then start the cycle all over again.