Let's Have a (Fashion's) Night Out 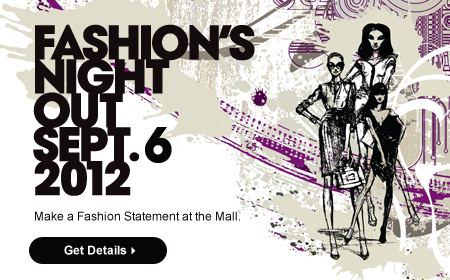 In less than a week, the great city of New York, along with hundreds of other cities all over the world, will partake in what is known as Fashion's Night Out. In its simplest form, FNO is an event where all the stores participating stay open much later than normal. They have special sales, giveaways, and, what I think is the coolest part, appearances by the designers. No, the designers aren't swarmed with bodyguards or an impenetrable entourage; they make themselves available to the public. Over the years, certain notable happenings have taken place: Thom Browne, one of my favorite designers, winner of GQ's Designer of the Year back in '08, and a CFDA (Council of Fashion Designers of America) award winner in '06, partook in a few friendly games of ping pong; Oscar de la Renta, the master of evening gowns, serenaded the lovely Sarah Jessica Parker; and designer Zac Posen cut a few dance steps. All in all, it's a night that allows you to see, touch, and smell "our" celebrities. I believe that the idea was conceived by the great Anna Wintour, editor-in-chief of Vogue magazine.

Consider this post a plea to the fashion community of Charleston. I'm about as green as they come in the industry, so I currently don't have the "pull" to make it happen here. However, I would greatly take pleasure in helping this vision come to pass. I feel like Charleston is a hotbed for fashion that's gaining more notoriety every year. For example, K. Cooper Ray of the style and etiquette blog Social Primer has been pumping out a special line of bow ties for the past five seasons with Brooks Brothers. This year marks the first that he will step out on his own and will be presenting his new line of ties and blazers at New York Fashion Week. I feel proud that a Charlestonian has broken through and is representing us well. Not that he's the first of us to present at NYFW, but it's just cool to know that I've shaken his hand, held a few conversations with him, and that he knows my name.

But back to the main topic: why Charleston should have a "real" FNO event. I say real because upon a little research, I learned that there are actually a handful of stores on King Street participating in the night, including Billy Reid, BCBG (both on King and at their Tanger location), Juicy Couture, and Tommy Bahama. This is a great start. Do I want us to be like the big dogs? Well, yes. I'm a winner and I expect to be good at everything I put my hands to (it's a nasty habit that I picked up when I was younger and I just cant seem to shake it.... sarcasm). Do I think we're ready to do it like they do it up there? Not even close. But do I think we can do a lot better than what we are doing? Abso-flippin-lutey. Nothing but good things can come from this. Stores are almost guaranteed to generate more revenue that night. Designers and shop owners get to develop a relationship with their customers. People will spend their hard-earned money with you if they like you. Even if you're more expensive than the competitors.

Another way to make FNO grow in Chas? Support the shops that are already participating. Here's some info on what is going on next Thursday:

At Billy Reid
150 King Street
"Join us for our 2012 Men and Women's Fall Collection preview! We will also be showcasing The Vault Collection from Rogue Wave Surf Shop. Come eat, drink and enjoy music by Ryan Bailey. See y'all there."
At BCBG
263 King Street
"In honor of Fashion’s Night Out, BCBGMAXAZRIA is stylin’ out on Instagram! Visit one of our BCBGMAXAZRIA stores, and get styled all night long! You’ll be dripping in BCBGMAXAZRIA from head to toe. Post your styled-out look on Instagram #BCBGFNO to compete for a chance to win an amazing $1,000 BCBGMAXAZRIA wardrobe."
Same thing will be going on at their Tanger location. 4840 Tanger Outlet Blvd Suite 855