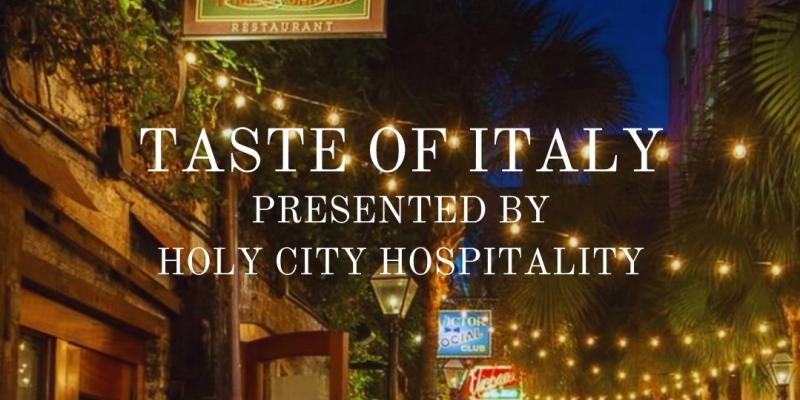 For one evening on August 15th, Hutson Alley and Vincent Chicco's Ristorante will transform into a charming piazza.

Introducing The Taste of Italy! A pop-up event to celebrate the re-opening of Vincent Chicco's Ristorante. For one evening on August 15th, Hutson Alley and Vincent Chicco's Ristorante will transform into a charming piazza. We will be serving house-made pastas and chef-created Italian delicacies. Italy's best beer, wine and spirits included, as well as live music. Food and drinks included in ticket purchase. Saluti!

This event will celebrate the re-opening of Vincent Chicco's Ristorante which is slated to welcome guests for dining on August 19th. Tickets are now available for $50 and will include drinks and appetizers. For additional information and to purchase tickets, visit theevent website.

Tickets are now available for $50 and will include drinks and appetizers.

Hutson Alley is a historic winding pathway between John and Hutson Streets in downtown Charleston. Adorned with fig ivy, vintage lanterns and palmetto trees, the alley is home to five Holy City Hospitality establishments including the famed39 Rue de Jean, Coast Bar and Grill,Michael’s on the Alley,The Victor Social ClubandVincent Chicco’s.Also located adjacent to the alley on the corner of Hutson and King Streets isVirginia’s on King.

Founded in 2001 by Michael Bennett, Holy City Hospitality is one of Charleston’s largest locally-owned hospitality companies dedicated to inspiring memorable experiences through inventive ingredients and gracious service. Holy City Hospitality consists of Michael’s on the Alley, 39 Rue de Jean, Coast Bar and Grill, Vincent Chicco’s, and The Victor Social Club, all located on Hutson Alley. The alley is a quaint hidden gem in the heart of Charleston’s peninsula, with Virginia’s on King just around the corner. Additional establishments include Good Food Catering and the Historic Rice Mill, a waterfront event space in downtown Charleston. For more information, call(843) 723-7952or visitholycityhospitality.com.